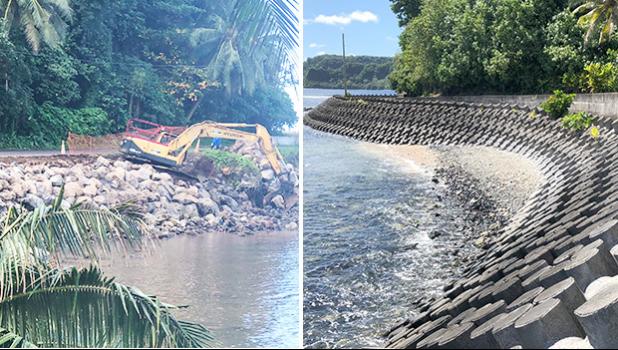 Pago Pago, AMERICAN SAMOA — Seen in these two photos are (right) the carapace wall in Sailele, built by McConnell Dowell over 15 years ago and (left) the latest endeavor by the Department of Public Works to protect the coastal shoreline in Lauli’i, which seems to be just a ‘quick’ fix with no long term planning involved.

Climate change is here to stay in American Samoa — with sea levels rising, as seen by the need for seawalls in many of the coastal villages. It is estimated that the shore waterline will be 15 inches higher by 2100. Doesn’t seem like much, but remember Tutuila island is also slowly sinking due to subsidence — a geological process that is happening because our island was once an active volcano.

And then there are the intensifying tropical storms, which may not hit Tutuila directly but cause big waves that come right up to houses, or rip up the asphalt road. Also, our coral reefs, which have historically buffered the island from strong waves and storm surges, have also been severely damaged by climate change, i.e. bleaching and coral eating starfish infestations.

It doesn’t help the community that most of Tutuila’s main roads are located along the coastal shore — and that’s where most of the villages and infrastructure is too. At high tide, the water level is often seen only a couple feet from the road, especially in areas without a seawall.

Many believe that part of the solution is that residents must begin to move inland or up to the mountains — away from the coastal areas where people have lived and identified as part of their ancestral lands. And then there are the seawalls that are being built today. Unfortunately, these seawalls seem to be ‘emergency’ responses to eroding coastal shores, as if we didn’t know there is a problem or that the problem only happens when we have hurricanes or tropical storms and put out our hand to Uncle Sam.

As reported in Civil Beat, a newly released World Bank report is predicting climate change could displace 48.4 million in the Pacific and East Asia by 2050.

It is the second part of the World Bank’s Groundswell report, first released in 2018, and it estimates that globally 216 million people will be forced to move due to climate change if action is not taken.

Pacific nations and territories are experiencing the realities of climate change already, such as increasing extremes in year-to-year El Niño and La Niña weather patterns, which can lead to droughts and water scarcity.

Climate-driven migration could be reduced by up to 80% if countries were to reduce greenhouse gases emissions, address gaps in development, restore ecosystems and build on ways to adapt to the realities of a changing climate. If not, “hotspots” for climate migration would being to appear within the next decade.