CoC forum raises question of how to solve ‘brain drain’ 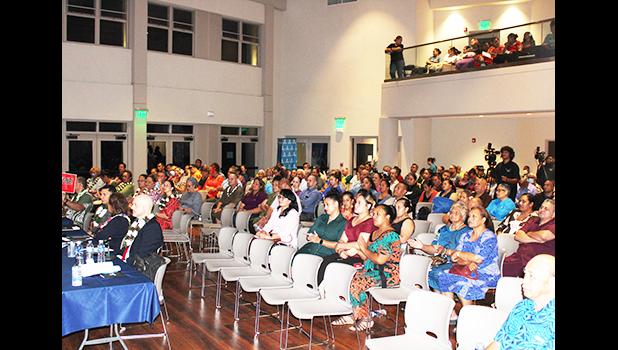 It comes up during every gubernatorial race — and remains unsolved
By
Fili Sagapolutele
fili@samoanews.com

Pago Pago, AMERICAN SAMOA — Current and past administrations have publicly discussed their concerns over American Samoans who leave the territory to seek a better future in the US and have tried to implement programs to attract them back home upon earning college degrees.

And it continues to come up during every gubernatorial race.

According to the Chamber, every year numerous residents and their families leave the island to seek economic opportunities off-island.

“What will your administration do to convince those who have left the island and become successful in the fields of science and technology, to return and bring their experience back to American Samoa?” was the question posed to the teams.

The Chamber moderator for this question, pointed out that this questions is very important to all candidates because of the “brain-drain” occurring in the territory.

The question was first directed to the Nua and Satele team and Nua responded in Samoan that this is one of the questions that is very important during every election year, because of American Samoans with degrees returning home and then finding themselves unable to secure jobs in the local market.

If elected, Nua promised that the Nua and Satele team will set up a program to employ these individuals based on their educational background and degree to ensure they get the job that will benefit the government and its people.

According to the Manu’a senator, these graduates can help push for further economic development for the territory.

Responding for the I’aulualo and Tapaau team, Tapaau said “that unless American Samoa brings in new revenues, it will be very difficult to create meaningful employment for the young people of American Samoa.”

“Not just any kind of job will keep our young people here. Many of them are returning with degrees or experience in the military, or exposure to the outside world they bring back knowledge and skills,” he said. “The person most qualified and most capable of creating the data center for American Samoa is [I’aulualo].”

Tapaau explained that a data center is like a hotel that rents out rooms. “They rent out servers and business like Google — rent that space. I’aulualo has the connections to do that,” Tapaau said.

For the Lemanu and Talauega team, Lemanu acknowledged the need to further improve businesses and education in the territory, saying that local students head off island for better education. He claims that half of high school graduates don’t want to go to college, as they prefer entering trade schools, and then enter the work place, working in jobs currently being done by Asians or other foreign residents working in the territory.

According to Lemanu, the other very important business issue for American Samoans to look at and also keep in mind is the status of land space. He said local residents are making a habit of renting out their properties to Asians to operate “mom & pop” stores. He said the current situation is that Asians are overseeing American Samoa’s land.