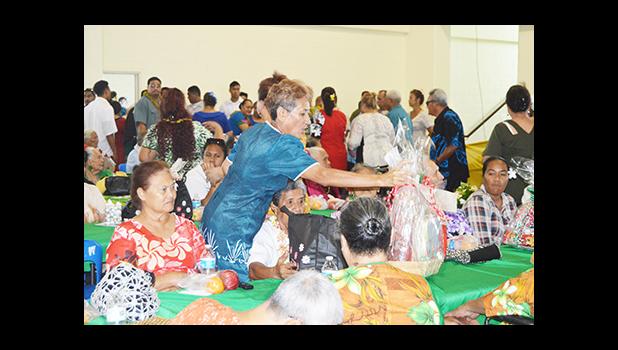 The Lolo Administration’s annual Senior Citizens Christmas Program for this year, kicked off yesterday morning at the Pago Pago Youth Center, where it was packed with the territory’s elders, who were praised by Gov. Lolo Matalasi Moliga for their service to the government and people of American Samoa.

The annual program, which includes the giving of gift baskets prepared by the government, started in 2013, when the Lolo Administration took office.

Recalling the program’s theme, “A Walk-in-Memory Lane”, Lolo said it’s very important for the government to look back in years past and to remember the great work and contribution the now senior citizens have done for the territory.

“The result of your hard work, has paved a better future for American Samoa,” the governor said, adding that the gifts given to the seniors will never be enough repayment for the dedication and service throughout the past years.

Lolo said the territory’s senior citizens are still contributing to the government, in a number of ways, including their continued prayers on a daily basis. He called on all residents of the territory to continue to respect “our elders” because that is where a person gets their blessings.

The territory’s elders are honored twice a year by the Lolo Administration — the annual Senior Citizen Month of May and then in December during the Christmas Program, because “you are very important to the government,” the Governor’s Chief of Staff, Fiu J. Saelua told the audience.

As part of the program, cabinet directors accompanied First Lady Cynthia Malala Moliga in distributing gift baskets to all seniors who attended the program.

American Samoa was under a “tsunami watch” for about two hours yesterday morning following an earthquake in the Solomon Islands, with an initial preliminary magnitude of 8.0 but later down graded to 7.8 by the US Geological Survey.

The quake occurred about 6:39a.m. yesterday — American Samoa time. Local authorities took to the airwaves on local radio stations to stress to the public that it was only a “watch”, although Samoa News had received reports of some people claiming that it was a “warning” causing a bit of panic. Local radio stations also received a lot of phone calls from the public seeking further clarification if it was a “watch” or “warning”.

Around 8a.m. yesterday, local authorities canceled the “tsunami watch” for all islands of the territory, while there was still ongoing confusion for residents, on whether it was a “watch” or “warning” despite local radio stations announcing that it was a “tsunami watch”.

Since the Sept. 29, 2009 earthquake, followed by a devastating tsunami, which claimed the lives of 34 in American Samoa, local residents have been on edge every time word goes out about an earthquake followed by a tsunami watch.

Therefore the official ASG holiday will be on Dec. 26 and Jan. 2, said Fiu — the Mondays following the actual celebratory day. The two ASG holidays were also cited in the calendar of events for this month from the Governor’s Office and distributed to directors and the news media.

Meanwhile, the calendar of events shows that the governor and lieutenant governor will host this evening the annual cabinet directors’ Christmas dinner. Other events on the calendar are the annual Holiday Music Festival program, which is organized by the Arts Council and the Department of Youth and Women’s Affairs. This year it will be at the Fagatogo Pavilion starting around 6p.m. from Dec. 18-20.

Dec. 21 is the annual Christmas visit by Gov. Lolo Matalasi Moliga, First Lady Cynthia Malala Moliga and Lt. Gov. Lemanu Peleti Mauga to LBJ Medical Center in the morning followed by a visitation to see inmates at the Territorial Correctional Facility. The Department of Human and Social Service choir will provide Christmas caroling, according to Fiu.

And although cabinet directors of the Executive Branch are to hand in their resignation letters by Dec. 15, Lolo and Lemanu reminded directors of their last event/activity of the current four-year term — the governor and lieutenant governor’s inauguration at 12noon on Jan. 3. And this event is also on the calendar of events from the Governor’s Office.