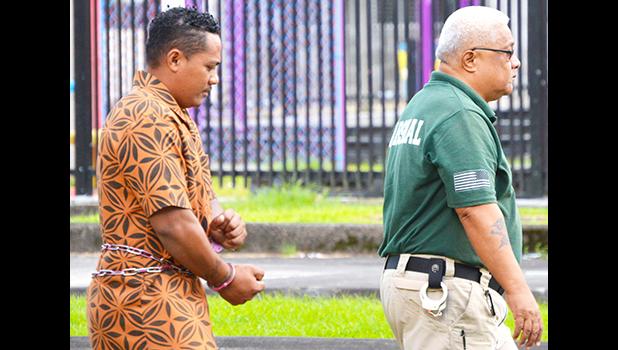 Pago Pago, AMERICAN SAMOA — Falaniko Fetoai is now back at the Territorial Correctional Facility (TCF) in Tafuna, where he is being held without bail. This was after Chief Justice Michael Kruse issued an order yesterday, saying the High Court will honor the decision made by District Court Judge Fiti Sunia last year, that Falaniko be held at the TCF without bail.

After the court issued its decision, Kruse immediately ordered his deputy court marshal to escort Falaniko to the custody of the government.

Falaniko’s hearing was continued from last Friday to yesterday morning, because the court wanted to know who made the decision to release him on a $3,000 cash bond — after he was charged with first-degree assault — and Judge Sunia had ordered that he be held in custody with “no bail”. (See story for details in Tuesday, May 29 issue of Samoa News.)

Acting Public Defender Kate Hannaher represented Fetoai when he appeared in court last Friday; however, when his case was called yesterday, it was Deputy Public Defender Ryan Anderson who appeared on his behalf.

Kruse was seen shaking his head and smiling from the bench after Anderson introduced himself to the court.

“How did the 'no bail' situation turn out to be a $3,000 cash bond situation? Can someone recap this issue?” Kruse asked both attorneys.

Dunn, who was the first to speak, said it appears from the government's notes that the mix-up was caused by the fact that the defendant had two different case files when his case was bound over from the District Court.

She explained what happened with Fetoai’s case, from the time of his arrest until his case was bound over to High Court.

According to the government, Fetoai was arrested on Nov. 28, 2017 and he made his initial appearance in District Court the following morning, Nov. 29.

During his initial appearance, the government filed misdemeanor charges against him. However, the prosecutor notified the court that additional charges would be filed against Fetoai when police completed their investigation.

According to the government, the defense attorney, during the defendant’s initial appearance, argued a motion to release Fetoai on his own recognizance.

The court rejected the motion and Judge Sunia then set bail at $3,000

On Nov. 30th, the government filed the additional charges against Fetoai, which included first-degree assault, a felony. For that matter, Judge Sunia ordered that Fetoai be held without bail.

Dunn explained that Fetoai appeared in High Court on Dec. 6, 2017 for his arraignment, after he waived his rights to a preliminary examination on Dec. 4.

It was during that time that the defendant’s case file which contained the misdemeanor charges against him — along with the $3,000 cash bond ordered by Judge Sunia — was transferred to the High Court and that's what caused the confusion.

According to Dunn, on Dec. 7, the defense filed their paperwork to confirm that the $3,000 cash bond had been paid, and the order to release Fetoai was signed by Kruse.

“So, it looks like the confusion was based on the mix up of case numbers; is that what you’re trying to explain to the court?” Kruse asked Dunn, who said it appears that way — based on the government's notes.

“Those are all my recollections regarding this issue your honor,” Anderson said, adding that he was the attorney on record when Fetoai made his initial appearance in District Court last year.

Anderson said he’s prepared to submit to the court the transcript of the entire proceedings from the time his client made his initial appearance until the time of his arraignment in High Court.

Kruse immediately intervened and said, “You better, because this is not over.”

“Alright, here is the order. The bail I signed is vacated because it was issued on false premises,” Kruse said.

The Chief Justice turned to the defense attorney and said, “Now, let us go back to the 'no bail' situation. The order to hold the defendant in custody without bail is still in place; and that means, this defendant is now under the custody of the government.”

He then turned to the side where the prosecutor was seated and said, “This time, the government’s motion to revoke bond is dismissed because bail was posted based on a different case file.”

Kruse said it seems there is no reason why the court should hold the $3,000 bond the defendant posted last year. He then ordered the Clerk of the Court to process a check and return the money to the defendant.

Kruse asked the government attorney, “Why does he have two files for the same incident? It this something new?”

Dunn said this is not a new practice, but this is how things work in the District Court. She explained that when a case is filed in District Court, the government would file misdemeanor charges first, followed by felony charges.

“Alright, Mr. Anderson, the defendant is now back to 'no bail' status. If you need to revisit this decision, you know what to do,” Kruse told the defense attorney.

He then turned to the corner where his deputy court marshal was seated and said, “Marshal, this man is now under your custody. Escort him to the warden.”