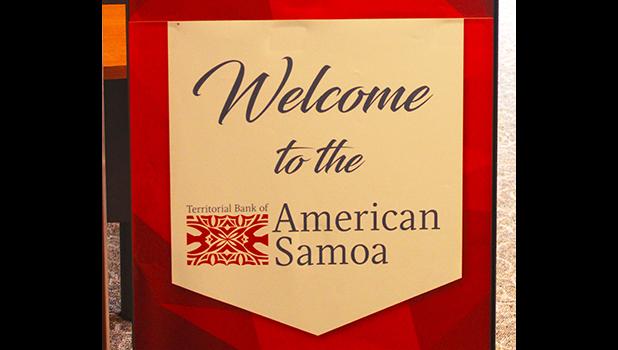 Some claim they have been “double charged”
By
Samoa News staff
reporters@samoanews.com

Pago Pago, AMERICAN SAMOA — A handful of local residents who hold active accounts at the Territorial Bank of American Samoa (TBAS) are confused — and frustrated — with what some of them have called ‘irresponsible” and “unprofessional” banking services.

Earlier this month, TBAS had issued a “bank notice” to its customers. The June 10th letter informs TBAS customers, “TBAS has been made aware by our current Debit Card processor, there are approximately 1,365 debit card transactions that were never processed from TBAS customer accounts. These transactions are from August 2018 through May 2019.”

Customers were advised that on Monday, June 17, 2019, “these transactions will be debited from identified accounts.”

TBAS management has offered its apologies for “any inconvenience this may cause to our valued customers.”

Over the weekend, Samoa News received phone calls from a trio of TBAS customers who were not happy with the situation.

According to a source at TBAS who didn’t want to be identified, when a customer swipes their TBAS debit card, the amount of the transaction is automatically put on “hold” for a certain period of time. That means the cardholder is not able to access those funds until the “hold” is lifted or until the money is transferred to the merchant’s account.

A customer who spoke to Samoa News says that basically, what has happened is, when he used his card to make a purchase, the amount of the purchase was deducted. And this was reflected on his bank statement. However, last week, the same transaction amount was deducted — again — by TBAS, “I was basically double charged,” he said.

Samoa News was not able to obtain a comment from TBAS officials over the weekend, because there is no 24-hour customer service helpline and the bank was closed.

This newest ‘kink’ adds to the list of complaints people have voiced about the government-owned financial institution. Complaints have surfaced more than once about TBAS debit cards not working when customers use them at local ATM machines, and at local stores to make purchases.

Based on an explanation earlier this year from TBAS management, the problem arises due to internet connectivity. Customers have long complained about the “embarrassment” they encounter when they go to local stores to make purchases and are later told that their TBAS debit cards are not going through. Cashiers from several local stores are also known to let out a ‘sigh’ when a customer presents a TBAS debit card to pay for their purchases.

“These cards always seem to be a problem,” said one cashier at an east side store who spoke to Samoa News yesterday. “When customers come in and they use the black debit card from TBAS, I know there’s a 50-50 chance that it might not go through. I feel sorry for these people. Because we swipe the card more than once and it’s the same thing. The receipt will say ‘unauthorized user’. I know they get embarrassed and frustrated because there’s a long line of people.”

“And when the card is declined, the majority of the people in line end up putting their shopping back because they were also planning to use their TBAS cards to pay for their groceries,” she continued.

Just this past April — during the busy Easter weekend — TBAS announced that their debit cards would be offline for a few days. This resulted in the bank having to open for business on a Saturday, for 3 hours, so customers could have access to their money.

In addition, customers have also complained about TBAS charging a fee for use of its ATM machines. (BankOh customers who use BankOh machines and ANZ customers who use ANZ machines are not charged — only unless their cards are used at machines other than the financial institution with which they bank).