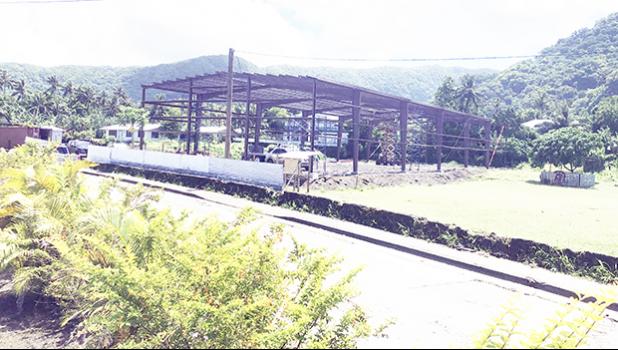 Pago Pago, AMERICAN SAMOA — A new warehouse on a lot — once grassy and empty — across from the Ave o le Fetuao Methodist Church in Fagaima has raised concerns from nearby residents and others.

This week, Tualauta Rep. Larry Sanitoa wrote — via email message — to Public Works director, Faleosina Voigt regarding the new warehouse, after several of his constituents contacted the lawmaker about it.

“They questioned whether the building meets all necessary requirements insofar as the permitting process: PNRS (drainage), Zoning Board and the building permit, etc.,” wrote Sanitoa, who copied the Commerce Department in the message.

Sanitoa said he has checked with Tino Mao at DOC, who confirmed that PNRS issued a temporary permit with conditions.  In addition, upon checking with Fa’auu Seumanutafa of DOC for Zoning Board approval, he advised the Zoning Board hearing will be held Apr. 8th at 1p.m.

“Director, as I understand it, a building permit is only issued by DPW after you receive the PNRS permit and Zoning board approval,” he informed Voigt.

However, Sanitoa points out that based on the photos submitted to Voigt and others in the email message — the project has already started.

Clearing the land for the construction project started a few months ago and there was talk that a new church building was to be constructed on the site.

With Fagaima already faced with flooding, residents are concerned that such a huge project will probably create even more flooding, as well as traffic problems. Residents have questioned whether the project — a major commercial one —  has gone through the permitting process and obtained the required permits, including the land use permit.

According to a public notice by the Territorial Zoning Board, the applicants for a zoning variance for the commercial warehouse in question are Donald and Hope Kruse.

The Zoning Board meeting is 1p.m. Apr. 8th at the DOC Conference room at the A.P. Lutali Executive Office Building. There are also other applicants to be reviewed during the meeting.

Also on Apr. 8th is a PNRS Special Board meeting at 9a.m is set for eight applicants seeking land use permits, according to a public notice. Donald and Hope Kruse are not listed on the notice for this special board meeting of the PNRS.