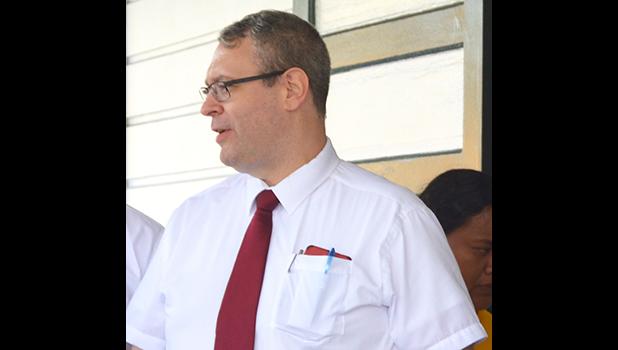 Prosecuting the case on behalf of the government is Assistant Attorney General Doug Lowe.

When the case was called last week, Uiagalelei told the court that because of his health, deSaulles is unable to return to American Samoa on his scheduled court date and his treatment is ongoing, with another one set for October this year.

When asked for his thoughts, prosecutor Lowe said he hates to be suspicious regarding this case. Sunia interrupted and said, “You’re paid to be suspicious. That’s your job.”

Lowe said he received some letters from the defense regarding deSaulles’ health — and he doesn’t want to ignore the doctor’s letters regarding the defendant’s treatment schedule — but if it pleases the court, he wants to speak directly to him on the phone and ask him if he’s coming back or not.

Lowe went on to say that the government wants to see more letters from off island physicians to confirm the schedule for the defendant’s treatment plan for this year, especially details of his medical condition.

When asked about the status of the case, Uiagalelei said he’s still awaiting discovery from the government. Lowe confirmed that discovery hasn’t been handed over to the defense, due to the fact that the file contains over 100 pages, and it’s hard for them to  make copies.

When asked if he’s still in contact with his client, Uiagalelei said yes.

The court granted the defense motion and the next pretrial conference is Mar. 26th of this year.
deSaulles, who is out on a $20,000, surety bond, is facing charges of stealing and embezzlement in connection with $121,00 belonging to Hope Dialysis Center. The money was allegedly part of funds held in a trust account.