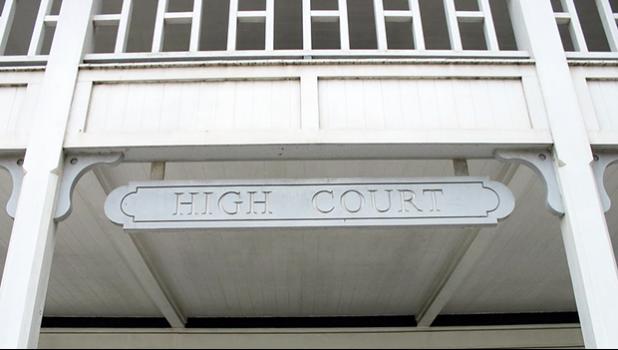 The High Court has scheduled for late next month the pre trial conference hearing for a man accused of beating his wife, who allegedly suffered bruises to her body and face.

The defendant, who Samoa News does not identify by name in these types of cases to protect the victim, had his case bound over from District Court early this week and was arraigned in High Court on Tuesday, where he entered a not guilty plea to one-count of felony second degree assault and two counts of misdemeanor public peace disturbance and third degree assault.

The charges against the defendant stem from an incident early last week at the couple’s home and resulted in the defendant allegedly assaulting his wife by beating her, using his hands.

According to court information, the wife told police that this isn’t the first time that the husband had allegedly assaulted her. She didn’t want to contact police or talk to somebody else on the prior alleged assaults because of her love for her husband. However, this changed, with the recent assault, which resulted in the wife calling police for help.

During District Court proceedings last week, the government revealed that the wife has filed with the court a request for a restraining order to prevent the husband from contacting her. Samoa News understands that the wife’s request was heard late last week in the High Court, where the wife and husband were present.

Because it was a closed-door hearing, it’s unclear as to the outcome of the proceedings. During last Thursday’s proceedings, District Court Judge Fiti A. Sunia stressed to the defendant that he is not to make any direct or indirect contact — and this includes through a third party — with the victim.

A traffic offense at a store parking lot, where police were called because witnesses were concerned that the two drivers were going to get into a fight, resulted in a man getting arrested and charged with felony driving, as the defendant’s driver’s license was suspended by the court for a previous offense.

During his initial District Court appearance on Tuesday, Tusi Valaau, whose bail was set at $500, was told that another court hearing is scheduled for Feb. 9.  He is also charged with driving while under the influence of alcohol and public peace disturbance, both misdemeanors.

Charges against the defendant are from an incident that occurred in Nu’uuli — when a car driven by Valaau hit another car in a store parking lot. Witnesses called police after they saw Valaau and the driver of the other car were getting into a heated argument.

Court information shows that a car in the parking lot had started to back out of the parking space, when all of a sudden Valaau’s car turned in and hit the other car. Valaau quickly jumped out of his car and told the driver of the other car to first look to see if the way is clear before backing out.

However, witnesses at the scene told police that the way was clear when the other car backed out, until Valaau’s car suddenly turned into the parking lot and hit the side of the other car.

Last July Valaau was convicted for driving while under the influence of alcohol and sentenced to 3 years probation. Among the conditions of probation is that Valaau’s driver’s license was suspended, he was prohibited from consuming alcohol and was not to violate any other local laws.

However, court information states that when police questioned Valaau about the incident in the parking lot, the defendant reeked of alcohol. It’s unclear if Valaau was able to post bail set by the court.