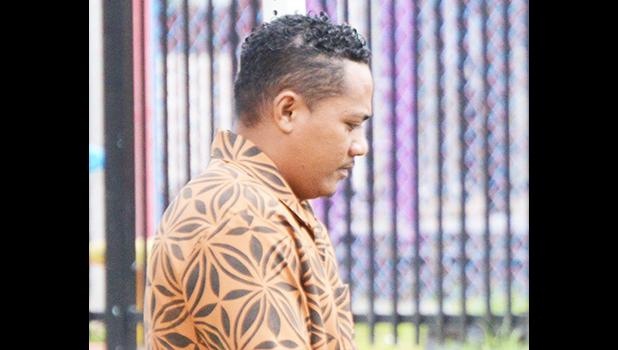 One of the victims has suffered memory loss and is yet to fully recover
By
Ausage Fausia
ausage@samoanews.com

Pago Pago, AMERICAN SAMOA — The driver of a truck from Leloaloa, who was convicted of injuring two people, is going to jail — for 10 years.

Falaniko Fetoai, who has been in custody on a ‘no bail’ status since his arrest on Nov. 28, 2017 was sentenced yesterday morning in High Court.

With his guilty pleas, Fetoai admits that on the night of Nov. 28, 2017 in Pago Pago he struck two people with his truck, causing serious bodily injuries.

Fetoai’s wife testified that before her husband was incarcerated, he was the sole caretaker for her and their 4 children. She described him as a hardworking father who sacrificed his life for his children, including their sick son.

“Ever since Falaniko was incarcerated, there is no one who can provide food for me and my children. Sometimes we receive help from his family — but not every day. There are times that we don’t have food on the table, no electricity, and also no running water for our house,” the wife said.

She asked the court to release her husband, so he can find a job to provide for their family.

According to TCF Chaplain, Rev. Faafetai Mulitauaopele Fuimaono, Falaniko is a good person who has many skills and talent.

Every time they share at the TCF chapel, Rev. Faafetai said Falaniko always tells him he’s truly remorseful for what he did, and he wants to return home to care for his young family and his parents.

When it was his turn to speak, Fetoai apologized and begged for a second chance. He also apologized to the victims and their family members.

Defense attorney, Talaimalo Uiagalelei asked the court for leniency and a probated sentence, saying his client takes full responsibility, and he is a person with a good heart, who loves his family, his parents, and his church dearly.

Prosecutor Christy Dunn asked for a period of incarceration.

She said she spoke to the families of the two victims and discovered that the second victim — a boy — sustained serious injuries but has made a full recovery. The other victim — a female — is still trying to bounce back.

According to Dunn, the young mother spent 2 weeks in the hospital following the incident. Her family had to send her off island for further treatment, and as of today, she has lost her memory and hasn’t been able to fully recover — both mentally and physically.

Dunn told the court that according to the victim’s family, they aren’t interested in any sort of restitution, all they want is for Fetoai to pay for what he did to her — with a long jail term.

On Nov. 28, 2017 a fight broke out at a residence in Pago Pago between Fetoai and the victim’s husband, after Fetoai refused to move his vehicle, which was blocking the entrance to the family’s security gate.

When cops arrived, a crowd had formed in front of the home, and there was a female — one of the victims — lying on the sidewalk.

According to a witness, a truck that was in front of the victim’s home had backed up on to the main road quickly, and then swerved back on to the sidewalk at a high speed, heading towards a crowd of people.

This was followed by a loud bang, along with yelling, screaming, and cussing coming from the crowd. The witness recognized the driver as Fetoai.

Police proceeded to Fetoai’s home in Leloaloa where Fetoai was in the process of rallying up family members to return with him to Pago to continue the fight. Police say Fetoai reeked of alcohol and he refused a breathalyzer.

The fight between Fetoai and the victim’s husband had escalated towards the main road, and that's when Fetoai and his friend were picked up by Fetoai’s sister, who was heading west. But the car stopped in front of the house where the fight started.

Fetoai and his friend jumped out and got into Fetoai's vehicle; and as family members were walking towards the house, Fetoai sped on to the sidewalk and struck the female victim so hard that she fell back a couple of feet. The victim was unconscious and bleeding from the mouth.

The second victim tried to jump out of the way, but his left arm was struck by Fetoai's truck, causing the left side of his face to hit the front part of the truck’s hood.

He said when he got up, he noticed the female victim on the ground, and Fetoai's truck never stopped but instead, drove off at full speed, as if he purposely meant to hit them.