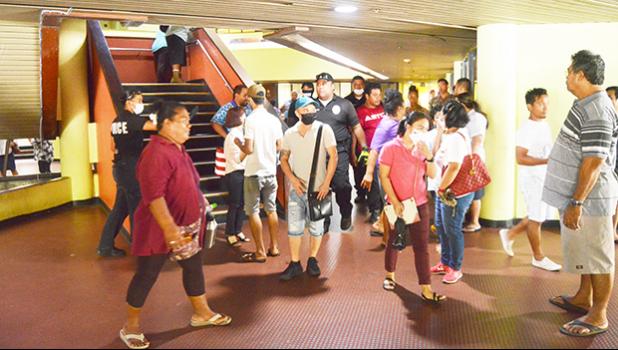 Pago Pago, AMERICAN SAMOA — This Samoa News photo taken after 9a.m. yesterday shows some of the crowds of people inside the lobby of the A.P. Lutali Executive Office Building Utulei. They were among a large group that showed up after 7:30a.m. to the Immigration Office, which had contacted certain foreigners who qualified and registered under the governor’s “short amnesty” program to come in, to take photos for their Immigration ID.

However, due to the large crowd of people that showed up, police were called to disperse the crowd, as many of them refused to leave —  such a large number of people in one place violates the current ban due to the COVID-19 restrictions on large public gatherings.

The crowd spilled outside to the front of the EOB as well as to the side & back parking lots. Two police officers are seen in this photo (far left & center) — one with a mask, the other with no mask — directing people to exit out of the EOB.

The governor’s “short amnesty” program was part of his Dec. 8, 2019 measles outbreak emergency declaration, which allowed undocumented immigrants to register by Feb. 6, 2020. Among the requirements is that they show proof of their MMR shots.

This Samoa News photo take after 9a.m. yesterday shows people at the side entrance into the A.P. Lutali Executive Office Building Utulei.  The crowd was dispersed by police officers, as the gathering violates the current ban due to the COVID-19 restrictions of large public groups congregating. [photo: AF]