Crowds at EOB signal release of batch #2 of stimulus checks 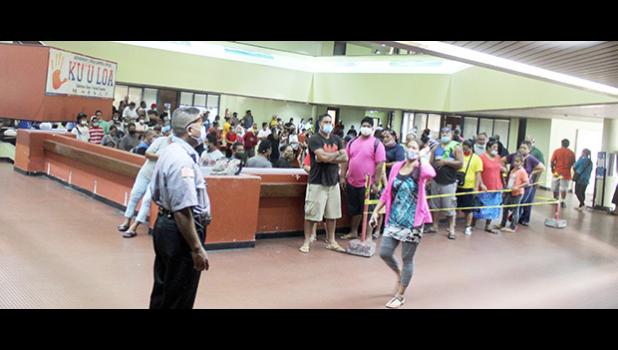 Pago Pago, AMERICAN SAMOA — Batch #2 of the second round of Economic Impact Payments (EIP) — or stimulus checks as part of the federal COVID Related Tax Relief Act, was released yesterday by the ASG Treasury. And those who came to the Disbursing Office don’t have mailing addresses on their 2019 tax returns.

The second batch of checks are for those who filed between Mar. 5 to July 1, 2020. This batch had 4995 checks, which totals more than $5.73 million of new money pouring into the economy.

Aside from those standing in line at the EOB, family members were waiting as well all over the ground floor. There was another separate long line for local residents filing their 2020 tax returns at the Tax Office — with the hope that a third round of stimulus money will come later this year if a federal bill is approved by the US Congress.

“A third stimulus check will be great — better yet  excellent — especially the [proposed] amount of $1,400 per adult,” said one woman, waiting in line to file her taxes, while pointing to the long line of those waiting to get their second stimulus check. “I hope everyone spends it wisely and on good things.”

While a majority of the EOB crowd standing in line wore face mask, there was no such thing as social distancing, as mandated by the governor in public places.

At the Post Office in Fagatogo, it was opened at 6a.m. yesterday, as traffic in the town area was moving, but at a slow pace most of the time. Police officers showed up to help direct both vehicle and foot traffic.

Information received by Samoa News indicates that the checks were in the mail boxes after 8p.m, Tuesday. Therefore, customers, with mail boxes outside of the main post office building were the lucky ones as they didn’t have to wait until the lobby was opened.

In preparation for the expectedly crowded day, Territorial Bank of American Samoa opened at 7:30 at both the Utulei and Tafuna branches with tents set up outside for customers to wait their turn to enter, observing social distancing. Bank officials say things moved along well yesterday, but “it was a busy one, just like last week Wednesday” when the Batch #1 of stimulus checks was released.

And a reminder from the ASG Treasury — “If you were expecting a check and did not receive one, please call or visit the Tax Office where they will assist you.” For questions call Tax office number:  633-4155