December looked at as “possible month to begin” repatriation plan 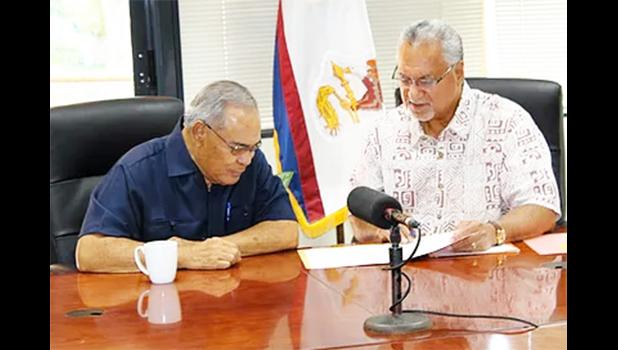 Pago Pago, AMERICAN SAMOA — While Gov. Lolo Matalasi Moliga has not yet made a decision on a repatriation flight for next month, to bring home the estimated 600 local residents stranded across the U.S.,  he has asked the ASG Coronavirus Task Force “to look at December as the possible month to begin” repatriation.

This is according to task force chairman Iulogologo Joseph Pereira, as part of his verbal comments made at last Friday’s Zoom Conference meeting between the task force, members of the Tagata Tutu Fa’atasi Alliance of American Samoa and US Interior Department’s Office of Insular Affairs Director Nikolao Pula, who was instrumental in orchestrating the meeting.

According to the Alliance, the group behind the push for repatriation flights from the US, it focused during the meeting on three “very critical things”: Repatriation Date; Financial Assistance; and Unemployment.

During the meeting, Health director Motusa Tuileama Nua said the government has no plans for a US repatriation flight in November, but once the governor authorizes repatriation the first flight will be a “test”, returning up to 80 residents. (See yesterday’s Samoa News edition for details.)

Alliance president Eileen Tyrell, asked about repatriation before Dec. 31st, saying that many stranded residents want to be home for the holidays with their families in American Samoa.

“The decision has not been made by the governor as to when the repatriation flight will happen,” was the response from Iulogologo, who pointed out that the DoH revised repatriation plan, shared during the meeting is very important. “We need to demonstrate to the governor that there is confidence that we will not have an accidental transmission by any asymptomatic patient.”

Responding to another question from Tyrell later in the meeting, Iulogologo informed the Alliance that the “governor is thinking about you and he actually said for us to look at December as a possible month to begin the repatriation plan.”

“But, again, everything has to do with the health issues,” he said and quickly noted concern with the uptick in the number of cases reported across the US. “We also see the rise in COVID cases in the Pacific. So these are concerns.”

“We need to assure the governor that what we’re doing is not going to create the same type of problem for American Samoa. I know all of you who are there share the same commitment that we want to protect all our people, including you who are stranded in the states,” Iulogologo said.

Iulogologo responded that this “is the first time that this message is coming loud and clear. We were never given any information on the concrete nature of the financial situation our people are facing.”

He said this will be presented to the governor “if there is any way we can help alleviate the financial stress” stranded residents are going through. He points out that this is one of the issues that came up in the task force meetings regarding financial difficulties faced by stranded residents. “So we will bring that message to the governor and we will get back to you on it,” said Iulogologo.

Iulogologo explained that the governor had issued a policy that any ASG employee stranded off island will continue to get their salary. “So that’s in place,” he said but he doesn’t know about such policy in private sector employment.

And if any stranded government employee is not getting their salary, “let us know. It will be helpful for us as well to give us a list of all those who are suffering financially, so at least we know the amount that we’re talking about and who. At least we can provide the figures to the governor to review,” he said.

He also told the meeting, which was joined by Pula from Washington D.C. and other Alliance members across several states that one of the challenges for ASG is the total cost of implementing the repatriation.

He said the “most expensive” [part] is placing travelers in quarantine and the task force will be looking to Pula for any federal assistance.

Under the DoH repatriation plan, the travelers will go through a 10-day quarantine in Honolulu — working with hotels as quarantine sites — and a 14-day quarantine upon arrival in the territory.

Another question from Tyrell is the online registration with the DoH website for stranded residents wanting to return home.  She points out that the local Attorney General’s Office had launched in early September this year, the American Samoa Repatriation online portal and stranded residents have uploaded their legal documents such as copies of their passports — as required for registration.

Tryell asked what happened to the documents already uploaded to the AG’s online registry and she is concerned that stranded residents registering again on the planned DoH registry will duplicate that work.

Attorney General Mitzie Jessop-Ta’ase, who attended the meeting, explained that the AG’s Office started that registry following a request from a subcommittee of the task force. She said the registry is still open and “we keep all those documents, [which] are not being forwarded anywhere.”

“The only purpose for the documents is for us to vet people’s residency requirements in order to return to American Samoa. We have that information and we’re coordinating with the Department of Health and will share with them, medical portions of the document because we don’t need that part,” she explained.

Motusa added that “at the end of the day, American Samoa will have one website for stranded residents” to register.

In her final remarks before the end of the meeting, Tyrell said that people of the Alliance — who are stranded residents — “want to reunite with their families” in American Samoa, and they will comply with all requirements for the repatriation plan, such as testing in Hawaii and quarantine.

“As long as they have hope they will be coming home, they will comply,” she said and told the meeting that because of the dire financial straits, faced by stranded residents, the group has set up a GoFundMe page, which is to help families in their time of need while stranded in the U.S.

Additionally, the Alliance has a Facebook page, which connects all stranded residents, where they also share their stories and other information.

In his closing remarks, Pula — the OIA director — said he “will do everything I can” to help, not only through his office, but connecting through other federal agencies for repatriation.

He also shared that it was early that morning that he spoke to his colleagues and friends in the Commonwealth of the Northern Mariana Islands (CNMI). “I was thinking, CNMI, their borders are open, have three flights a week coming from Guam, they already have the COVID infection, but they’ve only had two fatalities,” he said.

“So in my mind, they’ve done a great job to be able to sustain and curb the spread of the pandemic. I was thinking ahead, maybe they would have a chance to talk to our [people], and the task force, maybe in the future, share their successes, what ever they can continue to in terms of assisting American Samoa,” he said.

Earlier in the meeting, LBJ Medical Center chief executive officer, Faumuina John Faumuina said that “LBJ is ready to face the reality of the virus. The concern that I have is when the virus enters the territory and becomes widespread in a worst [case] situation, I get worried whether my staff, the nursing staff and the physicians can take care of this.”

He shared the brief update on LBJ’s preparations such as the COVID-19 medical tents to isolate — if there is infection when they come in. Also a COVID unit is ready as well as the lab.

For stranded residents preparing to come home, “come clean, don’t bring the virus. Make life easy for us,” he told the Alliance members and others watching and listening from off island.

He asked stranded residents to “please be patient” adding that he also has stranded family members wanting to return home.

Samoa News will report later this week on stories of stranded residents, shared during the meeting.