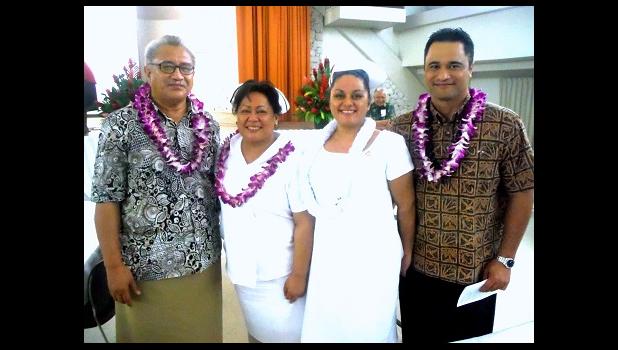 In the meantime, to fill the skill gap — ease immigration policies to encourage much needed people
By
Fili Sagapolutele
fili@samoanews.com

The government is planning to have Nu’uuli Technical Vocational High School become a full fledge trade school to graduate skilled workers for American Samoa, while efforts are being planned to set up trade courses at Manu’a High School.

These were some of the issues revealed by Commerce Department Acting Director Keniseli Lafaele during his economic development presentation last Wednesday night —  the governor’s executive assistant Iulogologo Joseph Pereira accompanied him.

As part of his presentation, Lafaele pointed to workforce development, which he said is “very important for any economic development” and “we need skilled workers and those are some of the initiatives we’ve been working on in the past four years.”

He said the Workforce Development Task will be presenting their plan to the governor in terms of developing a workforce that will be required to implement the local economic development plan.

Information provided in Lafaele’s presentation shows that a DOC and Education Department partnership has initiated a three-year “workforce development” memorandum of understanding and identified targeted trades highly needed for skilled workers in the territory using the Nu’uuli VocTech High School.

The goal, according to the presentation is for Nu’uuli VocTech seniors to pass the National Occupational Competencies Testing Institute (NOCTI), which is a digital credential that a student could use to count for college credit. Additionally, the NOCTI is a credential that can be used to show skills readiness for direct employment in trade fields.

According to DOC, target trades for the first three years are agriculture, automotive, building construction, and electronics.

(As reported by Samoa News last year, Nu’uuli VocTech seniors took the NOCTI for the first time and 17 of them passed from among 66 seniors who took the two-part test.)

Workforce Development is one of the seven focus areas identified in the 2014- 17 Economic Development Implementation Plan for American Samoa released in early 2014. The EDIP is made up of public and private sector members.

During his presentation, Lafaele informed Chamber members that the American Samoa Community College is building a trade school that is expected to be open sometime this year.

Additionally, there is plan for Nu’uuli Voctech “to become a real trade school, bona fide trade school” rather than a mix, as it is now — academic and trade.

“There is a plan to make that school strictly a trade school and to expand it for students from 14 to 18 years old and then it would be a more advanced trade school and apprentice program,” he said, adding that DOC is funding the development of Nu’uuli Voctech, as well as trade courses for Manu’a High School and the program for Manu’a should start very soon.

In his executive order early this month establishing a seven-member task force, charged with providing recommendations pertaining to the future of public education in American Samoa, Gov. Lolo Matalasi Moliga tasked the group with among other duties, finding financing sources necessary to adequately fund a meaningful vocational trades program that integrates the resources of both ASDOE and ASCC.

“While we are training our young people to be skilled, our economic development cannot wait until they become skilled,” Lafaele told the Chamber meeting. “So we need to borrow this expertise from off island, some of them could be foreigners.”

Therefore, “We need to ease up on our immigration policies to allow these much needed people to come in and fill in the gaps,” he said.

Also, “We do not have all the money that we need to fund our economic projects, so we will rely on investors from other countries to become investors [in American Samoa] rather than foreigners to come here and take over our farms and our stores,” Lafaele said. “We would like some serious foreign investors to spend some serious money.”

Some of the immigration policy improvements shared by Lafaele is the 14-day permit for citizens of Samoa and this is to promote business and tourism. Another example is the 30-day multi-entry permit for $50 and this is available now. And if the person needs a one-year permit, the fee is $600.

He also said that American Samoa is allowing citizens from 37 countries that are in the US VISA waiver program and these individuals can visit the territory “as tourists or business people without paying a fee.”

Another improvement to the immigration policy is that the Department of Legal Affairs, which includes the Immigration Office and the Attorney General’s Office, is improving their computer system so that people can apply online for permits to enter the territory. And this will probably come on line by the end of March this year.