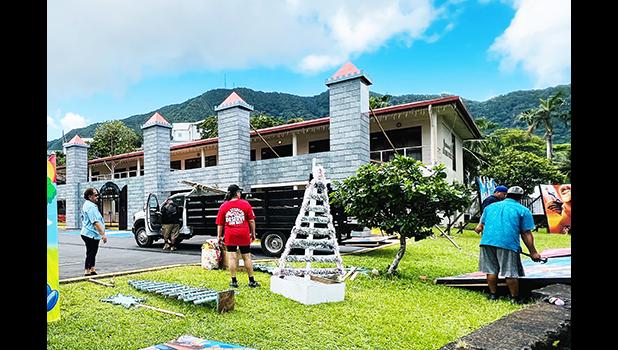 Members of the public have taken their concerns to social media and contacted Samoa News about the “unnecessary spending of public funds” for the project.

Samoa News reached out to the Director via email and copied the Governor’s Chief of Staff Loa Tauapai Mulipola for comments, but there has been no response since last week Thursday.

However, DOE officials — who spoke on the condition of anonymity for fear of repercussions — told Samoa News the project cost close to $100,000 USD.

Efforts to get confirmation and comments from DOE on the accuracy of the reports were unsuccessful.

A post was circulating online last week by parents lamenting on the cost of the DOE’s Christmas decorations yet there are not enough school busses.

A DOE official Juanita Leiato Manutulila defended the DOE project on social media saying this is a Disney Christmas for the kids.

“Can you envision how much joy and happiness this idea will bring to our kids?

“So stop with the stupid ass questions and the negativity, support this great idea, support the project and support the efforts in creating something wonderful for the children of American Samoa, because they DESERVE OUR BEST!

She went as far as commending All Star for making this idea a reality.

Samoa News should point out that also not mentioned is where did the money come from to fund the project? Is it an “infrastructure” project funded by CIP funds? Or perhaps a “pre-school project” funded with Early Childhood funds? There is no doubt however that it is a handsome project that will be enjoyed by children of all ages. Merry Christmas DOE.