DoH looking at options for repatriating local residents from U.S 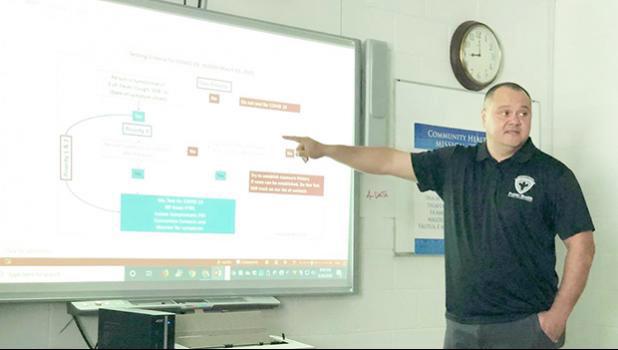 Pre-boarding quarantine in Hawaii with testing again upon arrival
By
Fili Sagapolutele
fili@samoanews.com

Pago Pago, AMERICAN SAMOA — The Department of Health is looking at all available options that would allow virus testing in Hawaii for repatriation passengers, who could be quarantined at a location in Honolulu before boarding a charter flight to American Samoa, says DoH Epidemiologist Dr. Aifili John Tufa.

Gov. Lolo Matalasi Moliga — at Sunday’s ASG coronavirus task force meeting —instructed health and hospital leaders along with physicians to come up with a plan, which includes recommendations on how the government would carry out a repatriation flight to bring home American Samoa residents stranded in the U.S.  (See Samoa News edition Aug. 1st for details.)

At the cabinet meeting, Dr. Tufa gave an update of the COVID-19 pandemic across the globe as well as in the Pacific region. He explained that a spike in new cases comes as countries started re-opening their borders.

Responding to a quarantine question during the meeting, Dr. Tufa pointed out that it’s “very important for us to make sure that we really have a good quarantine process. So that if we do get people in from Hawaii and somebody does test positive, we can contain that virus... through quarantine” and not spread the virus to other sectors of the community.

He stressed that this is a “very important part” of a repatriation plan.

There was also a question on testing of travelers on a repatriation flight. Dr. Tufa noted that current rule is that the traveler presents proof of a negative COVID-19 test prior to arrival, as one of the conditions for entering the territory.

“One of the things that we can do — one of the approaches were are looking at — is testing in Hawaii before they get on the plane to come here. Getting test results before getting on the airplane so we can screen” them in advance, he said.

However, he said there is still the issue of getting a negative test three-days prior to travel but the traveler “can still be exposed to somebody else who has the virus” in that three-day period.

“And that test is not going to reflect that exposure,” he said and points out that one of the proposals that “we’re thinking about is doing pre-boarding quarantine in Hawaii.”

“Work with a hotel or a place they can go, stay there for about seven-days, get the testing done, to make sure they’re not exposed to anybody. And then straight from that place to the airplane, come home and finish their quarantine here,” he explained.

“Those are some of the things we’re looking at but the logistics are a little bit more challenging. But if there’s a will, there’s a way,” he said, but quickly added that “it’s going to cost some money.”

The governor has appointed a special committee to plan the details of an “exercise” next week that will test ASG’s ability to handle an incoming repatriation flight with a scenario of 300 passengers on board.

Health director Motusa Tuileama Nua pointed out that American Samoa is working on identifying doctors in Hawaii to partner with for testing of travelers before boarding the incoming flight.

Motusa also said that DoH’s two new quarantine facilities behind the Tafuna Community Health Center has a 40 to 50 bed-space capacity.

Meanwhile, Dr. Tufa said that as of Aug. 30th a total of 1,571 samples have been tested for American Samoa and all of them negative. He also said that DoH has on hand 7,465 test kits, which are important when and if the governor does agree to a repatriation flight from Hawaii. The test kits are also important for contact-tracing.

Dr. Tufa also gave an update on the status of cases in Hawai’i  — 8,139 infections and 62 deaths as of the Aug. 29th as report by the Hawaii Health Department.

However, Samoa News points out that the numbers continue to increase. As of 12noon, Sept. 1st, total confirmed cases jumped to 8,653 with deaths up to 74, according to Hawaii Health Department public records.

Honolulu-based news outlets have reported that the continued increase in virus cases has strained health care resources — such as nurses and doctors — in Hawai’i.

Dr. Tufa told the cabinet meeting that this is also an issue for American Samoa to consider if flights are re-opened between Honolulu and Pago Pago given that there is only one hospital in the territory.