Dr. Tufa: We are one step ahead of the virus — let’s stay that way 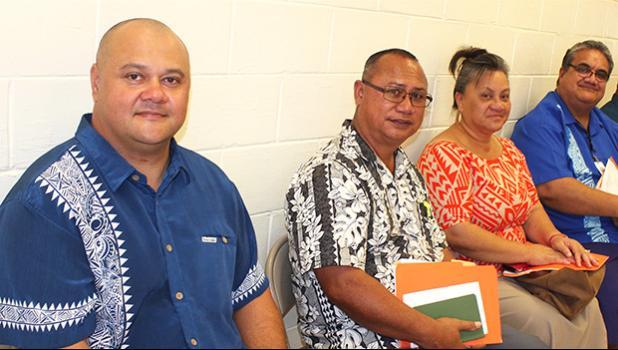 Pago Pago, AMERICAN SAMOA — Criteria for who is to be tested for the deadly coronavirus has already been established and shared with LBJ Medical Center, according to Health Department Epidemiologist Dr. Aifili John Tufa, who points out that American Samoa is a step-ahead with preventive measures to combat COVID-19 pandemic.

However, “we are worried” about people who show little to no symptoms, as they may unknowingly spread the virus, said Dr. Tufa during the DoH presentation at last Friday’s COVID-19 meeting, and also provided a projection of the death rate for American Samoa — based on global data — if the virus is spreads to the territory.

He noted actions taken by some of the Pacific countries to combat the spread of the virus such as social distancing — “which is the main thing”, as well as closing schools, restaurants and theaters.

He shared global data on how quickly the virus can spread. He said it suggested that if one person is infected — in about two or four days, that person will infect two people. And then in two or 4 days, these two will infect four.

“So what do we do?” he asked and answered, “We’re doing what we’re doing now, which is a step ahead of the virus. Containment of the disease through contact-tracing. We’ve already got our quarantine and isolation protocol in place.”

“We’ve already done mitigation strategies — such as social distancing — and right now, also with the [emergency] declaration from the governor, we are now staggering our working hours to minimize the chance of people coming together or being exposed to one another,” he explained.

Based on current global statistics, he said a majority of the patients who are infected with the virus, “a lot of them, had no, to very mild symptoms. Meaning that they probably won’t go to the hospital to get tested.”

Additionally, 14% will have a severe case — severe enough for them to go to the hospital to be reported and 5% may need some ICU treatment.

LBJ’s Chief Medical Officer, Dr. Iotamo Saleapaga, who attended the meeting, points out that the very high percentage of those with no, to mild cases are called “asymptomatic”, and considered a “dangerous” group.

Dr. Tufa concurred with Dr. Saleapaga, adding “we are worried about” this group, which would be “spreading the disease unknowingly or — maybe knowingly.”

Dr. Tufa also said that DOH “stressed the importance of being responsible. We have to get the message out, not only to ASG but also to the community, that in order for us to stop this, it takes “personal responsibility”.

“The virus doesn’t come out of your body, and then go look for another. We take the virus from one person to another,” he explained. “So it’s responsibility. If you know that you travel and have had these symptoms [of the virus], it’s your responsibility to isolate yourself, make sure that you’re quarantined and not exposing other people,” he said.

Dr. Tufa urged these individuals to contact DoH, which will send a team “out and visit you. So those are the small things we can do now, to stop the spread. It's an individual thing.”

With the global data, DoH used that information to “calculate, if the virus were to get here, what can we expect?” he said, noting that American Samoa has no confirmed case at this point and “we want to keep it that way.”

“However if the virus gets here and infects 1% of the population, we can expect about 551 will get the virus, with 81% of them or 446 with mild to no symptoms. About 14% or 77 of them, will have symptoms sever enough to go to the hospital, [and] about 28 of them will need to be treated at ICU,” he explained.

Dr. Tufa said the population used in the calculation is based on the 2010 Census estimate of just over 55,000 people in American Samoa. (Samoa News notes that ASG Commerce Department’s 2019-Mid Year population of American Samoa is estimated at 58,500.)

Although the highest fatality rate for the virus is 12.1% in Italy, Dr. Tufa said the world numbers have the rate at 2.5%.

“So if we follow this rate of 2.5%, we can expect about 14 people to perish; however, given our demographics and some pre-existing conditions of our population, we don’t know where we would fall in this spectrum,” he said, noting that about 67 people will perish if we are using Italy’s higher fatality rate of 12.1%.

“The moral of the story here is that we have to emphasize that it’s important that we stay committed to our policies, we stay vigilant, we stay ready, in the case or the event that the virus gets here,” said Dr. Tufa, who then spoke in Samoan, stressing the importance of staying prepared and following protocols to protect the community and to prevent the spread of virus.

Dr. Fred Urhle, with the Veterans Affairs Clinic in Tafuna, commended DoH in keeping the virus out, but he said, more needs to be done to prevent public gatherings.

He said that if 1% of the population — as cited in the DoH presentation — is infected, that’s going to cause a “huge problem” and “will overwhelm the hospital very, very quickly.”

“I think we need to be more strict, with what we’re allowing” such as the huge Futiga funeral, he said.

He went on to explain that “they used to say that coughing and sneezing are what transmits it” but it “appears that just talking is enough to spread the virus. So the recommendation now is that you wear a mask when you’re outdoors.”

“Early on in this disease process, that was not the recommendation. So again, a bandana, or what ever you have to cover your face to protect you just from talking with people in the room would be important. I think we need to do more than what we’re doing right now to try to prevent [the spread]” he said.

He reminded the meeting that American Samoa has a high population of people — between 40% to 50% with underlying health issues — such as diabetics, hypertension, obesity — which makes them susceptible to the virus.

Dr. Tufa also gave a brief summary of DoH’s testing criteria, which is shared with LBJ, as some people are asking, “Who do we test”?

“But if no, the DoH team will ask that person more questions because you might be exposed to somebody who was exposed to a traveler. So we will do more investigation, if we cannot establish a link, we will not test,” he said, noting that if the person has none of the symptoms, “we don’t test.”

Dr. Saleapaga asked if all health care providers — both at DoH and LBJ — should be tested now, to which Dr. Tufa said that if the provider falls in the testing criteria — such as if they have the symptoms and if they were exposed to a traveler — then they should be tested.

American Samoa does not have any test-kits at this point with suspected samples sent off to the Hawaii state lab for testing.