Drama over absentee votes may result in challenge 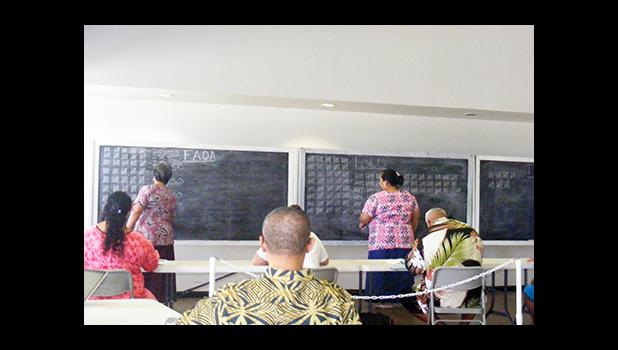 A representative for the gubernatorial team of Faoa Aitofele Sunia and Rep. Larry S. Sanitoa has declared a possible challenge focusing on the absentee ballots in Tuesday’s election and such a move would result in an appeal of the outcome of the gubernatorial race.

Nathaniel Savali made the declaration during the absentee ballot counting at the Election Office in Tafuna where the incumbent team of Gov. Lolo Matalasi Moliga and Lt. Gov. Lemanu Peleti Palepoi Mauga led with 892 votes, followed by Faoa and Sanitoa with 493 votes while the team of Tuika Tuika and Salanoa Iuni Maeva Saveena received 64.

A total of 42 absentee ballots, with no dated stamp on them, is the target of the Faoa and Sanitoa challenge. Overall total of ballots counted for the gubernatorial race stands at 1,449, according to the unofficial results.

As in past election years, all absentee ballots — for both local and overseas voters — are placed in one ballot box marked “Governor” and this is the same for the “Congressional” race. At yesterday’s absentee voting count, the “Governor” ballot box was opened first and all ballots were poured on a long table where election office staff then sorted them out and opened up the sealed envelopes in which the overseas absentee ballots were sent and received by the Election Office.

At that point there were five ballots being questioned with the Election Office attorney Sharron Rancourt also present at the discussion, where later it became clear that the 5 ballots in question were not dated, or stamped with a date.

However, it should be noted that by this time, nearly 1,000 ballots had already been counted. Following a lengthy discussion, it was agreed upon that the five ballots being challenged or questioned would be set-aside while the counting process continued.

More ballots were discovered without a date and were set aside while the counting continued. About two hours after the counting began around 2p.m. the process was completed and everyone waited in the conference room while Uiagalelei and the Election Office attorney met privately to discuss the issue at hand.

Around 4:30p.m. Uiagalelei emerged from the meeting and told the poll watchers as well as observers in attendance, including news reporters, that there was no problem with the election process dealing with absentee ballots but the only issue at hand is that the ballots were not stamped with a date on which the elector cast his/her vote.

Based on information revealed at the conference room, local absentee ballots are pre-dated, or a date stamped on the ballot before the absentee voter casts his/her vote while the date the election office receives an overseas ballot is stamped on the envelope received from overseas voter.

However, what was not clear and was also a question raised by poll watchers was which of the 42 ballots without a date were local versus overseas.

After more questions from poll watchers for the gubernatorial candidates and responses from Uiagalelei, the decision was reached to go ahead to count the 42 ballots and include them in the final results of the gubernatorial absentee ballots.

Savali then informed Uiagalelei that the Faoa and Sanitoa team reserves the right to challenge the results because of the “undated” 42 ballots, but a decision on such action, which would result in an appeal, would be made soon.

Around 4:53p.m. yesterday, the gubernatorial race absentee ballot counting came to an end.

During the absentee count there were seven voided ballots due to among other things, the elector voted for two different gubernatorial teams.  There was no breakdown available yet from the Election Office as to the number of overseas absentee, local absentee and Swains islands — whose ballots were cast at the Election Office.

In the absentee vote in the 2012 general election a total of 1,124 ballots were counted with 411 votes for Lolo and Lemanu and 401 to the Faoa/ Taufete’e team while the rest went to four other gubernatorial teams.

For the congressional race absentee ballot count there was no drama, with a smooth counting process.

Six ballots were voided for either voting for two candidates or no vote at all on the ballot for any candidate.

The breakdown of ballots cast for the congressional race, according to the Election Office, has 1,321 for local absentee, 111 for overseas absentees and 10 for Swains voters.

In the 2014 congressional race, a total of 966 absentee ballots were counted and Aumua received the highest votes at 378, followed by then Congressman Faleomavaega Eni at 290 while the rest of the votes went to seven other candidates.