ECE strike over no paychecks for summer workshop is called off 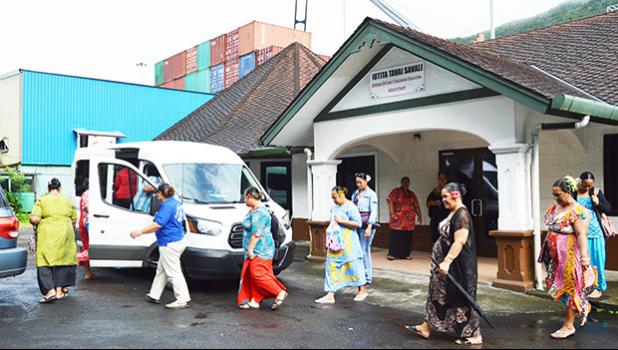 They still haven’t been paid and DOE says they’re not the only ones
By
Ausage Fausia
ausage@samoanews.com

Pago Pago, AMERICAN SAMOA — A strike planned for last Friday morning by a group of about 50 teachers from the Early Childhood Education (ECE) Division of the Department of Education (DOE) who claim they had not received their checks for the four weeks they worked during the summer was cancelled.

Some teachers had hoped to have some extra spending money for their families when they got paid for the summer workshop they attended. But as of last week the group had not received their checks for the four weeks they worked during the summer.

Three teachers shared their story with Samoa News after weeks of getting the runaround from DOE and Treasury.

They said the funds that paid for the workshops came from Head Start, which is fully federally funded and they were promised that they would receive their checks before the start of the new school year. However that turned out to be just talk.

Other teachers said Treasury told them that the checks were being processed with their grantor. Then later they were told by their division head that they should be getting their checks late August. But August, then September came and went and still no checks.

Some teachers said they’re tired of the run around and have come to the media hoping that publicity about their situation would move those responsible to pay them.

“Treasury had told us the checks were being processed, while the Department of Education said we would get paid in late August. It’s now heading to the last week of October and we still haven’t see any sign,” one teacher said.

One teacher said she conducted her own investigation into the matter and the finding is unbelievable.

“I was told that there was no paperwork nor time cards filed to the DOE and Treasury for payment. I then sought legal advise and my attorney is now handling the case,” one teacher said.

A strike was supposed to be held last Friday morning from 6- 8 a.m, however, no teachers turned up for the strike. Only three members of the ECE Policy Council (PC), including the PC Chairman, Fauaa Lokeni were at the location.

Later on that morning, Samoa News was told by some members of the group that the strike was cancelled for several reasons. Two teachers said that they were told by a member of their ECE main office that according to their Division Head, Mileneta P. Tinitali, they will receive their paychecks next week (this week).

Four other teachers told Samoa News that they pulled out from the strike after they were each advised by their attorney not to take part in the strike, while one teacher said that she changed her mind and decided to go back to the classroom and teach her children instead of taking part in the strike because the answer will be the same. There will be no paycheck at all.

A few members of the group received information about an “In Service meeting” that was supposed to take place at the ECE main office in Fagatogo on that same morning had been cancelled until further notice.

However, instead of having the meeting at the conference room at the ECE main office in Fagatogo, the meeting was held at ECE Director Tinitali’s residence in Vaitogi.

Many teachers were unaware of the new venue for the meeting. Some of them stated that they were never informed about the meeting while others believe that the reason the meeting was held in Vaitogi was a move by their division head to avoid being confronted by the teachers’ strike regarding their paychecks.

“This is weird and unprofessional for not informing us about the meeting. The meeting should be held at our conference room at the ECE main office in Fagatogo and why was it the meeting was held at our head division’s residence in Vaitogi?” one teacher asked.

Samoa News visited the ECE main office in Fagatogo in an effort to speak with the ECE Director regarding the issue. However, teachers who were at the main office stated that Tinitali was at her residence in Vaitogi preparing for a teachers meeting to be held at her residence.

Samoa News visited Tinitali’s residence in Vaitogi and confirmed that a meeting was held there with over 30 people attending. Mrs. Tinitali agreed to an interview.

When informed that many teachers were unaware of the meeting and they’re questioning the reason why the meeting was held at her residence instead of the usual location, the conference room at the ECE main office in Fagatogo, Tiitali angrily responded that it was, “none of their business as to where the meeting is to be held. That’s my call.”

She said that the meeting was supposed to be held in a conference room at the Tradewinds Hotel, however, a representative of the hotel contacted her on Wednesday and said that the room is not available. The air conditioning in the conference room at their main office is not working, and that was why she decided to have the meeting at her residence.

Tinitali strongly denied the allegation that the move to hold the meeting at her residence was to avoid being confronted by the teachers’ strike.

“I don’t care if they want to go on strike. They have the right to do that but I already explained to them the reason why they hadn’t receive their paychecks on time,” Tinitali said.

According to Tinitali, the funding for the program had expired and she had to re-submit letters to request new funding to pay the teachers who worked during the summer program.

She said she received an email from HeadStart last week and was informed “that their process is almost completed and they asked me to give them a couple of days to finalized their process before approval.”

Tinitali added that all paper work was submitted for payment and the only thing they’re waiting for is the release of funds. She stated that hopefully by this week, teachers will see their paychecks ready.

She further stated that she asked if our local Department of Treasury could use funding from the COVID-19 to cover the cost for the summer program and the response was no because this summer program is funded by HeadStart.

Discussing the issue about the teacher’s strike, Tinitali said that when she heard rumors about the strike, it broke her heart because ECE has come along way and they have done their part to make sure no teacher is left behind.

She said that the majority of teachers complaining about not receiving their paychecks were the ones who came into the program without an AA degree. However, the program assisted them and provided them with everything including free education. As of now, they’re certified teachers with Bachelors degrees.

“The issue of teachers complaining about not being paid is all over social media including Facebook and now it’s in Samoa News. This will be the first time ECE has negative publicity and it does not look good for us because our grantor will assume that something is not right with the program — but nothing is wrong with our performance.”

Tinitali said the problem arose when teachers confronted the chairman of the ECE Policy Council (PC), Fauaa Lokeni about their paychecks instead of bringing the issue straight to her attention.

Instead of coming to her to discuss the issue, Tinitali said Fauaa turned around and conducted his own investigation by asking the Treasury and DOE whether any paperwork had been filed.

Speaking about the PC, Tinitali said that the role of the PC is to review policy for ECE while her role as the Division Head is to run the operation. PC has no role at all in the issue of teacher’s salaries.

An email was sent to the DOE director, Dr. Ruth Matagi-Tofiga regarding this matter but as of press time, Samoa News received no response.

But deputy director of DOE Faauifono Vaitautolu corroborated Tinitali’s statement and told Samoa News that all paperwork to pay teachers for the summer program has already been submitted and they’re waiting for approval by the grantor before funding is released.

Vaitautolu further stated that ECE teachers are not the only ones who have not received paychecks for the summer program. There are other high school and elementary teachers who are facing the same problem.