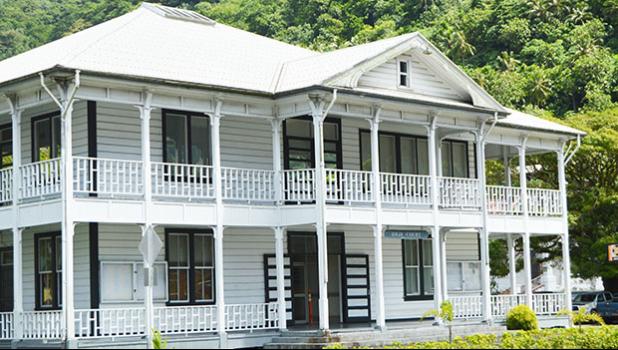 Pago Pago, AMERICAN SAMOA — An overstayer from Samoa who eluded police officers 8 times, is finally in custody after he was arrested last week for stealing and burglary.

Falaniko Lasalo made his initial appearance in court last week.

The government has filed two separate cases against Lasalo.

In the first case, Lasalo is charged with one count of stealing and one count of burglary, both class C felonies punishable by imprisonment of up to 7 years, a $5,000 fine or pursuant to A.S.C.A 46.2101, a fine equal to twice the amount of gain from the commission of said crime, up to a maximum of $20,000, or both such fine and imprisonment for each count.

In the second case, he is charged with one count of resisting arrest, a class D felony punishable by imprisonment of up to 5 years, a $5,000 fine or both.

During his initial appearance, Lasalo’s defense attorney, Assistant Public Defender, Ryan Anderson informed the court that his client wished to waive his rights to a preliminary examination (PX).

Lasalo appeared in High Court last week for his arraignment and his first pretrial conference is scheduled for Sept. 22.

In March of this year, a report for a burglary involving Lasalo was filed at the Tafuna Police Station (TPS). The report stated that Lasalo was allegedly involved in the burglary of a home where several personal items were stolen.

Witnesses, who were questioned by investigators, stated that they saw Lasalo and two other male individuals hanging around the house one afternoon before the house was ransacked and burglarized.

Another witness told investigators that it was Lasalo who allegedly burglarized the house and stole several personal items from inside the house. Some of the stolen items were given to one man who later confirmed the incident to investigators.

The man told investigators that the suspect told him that he (defendant) and other two men went inside the house at night and stole several items. The total value of the stolen items including damages to the house was over $100.

On Apr. 23rd, 2020, an arrest warrant was signed and issued by Acting Associate Justice Elvis P. Patea for the arrest of Lasalo for charges of stealing and burglary.

The final pursuit and search was approximately four and a half houses from where Lasalo was first spotted.

Several officers went to Lasalo’s residence to execute the warrant but they were unable to locate Lasalo. They also searched for Lasalo at his friend’s residence and other places where he usually hung out, but Lasalo was nowhere to be found.

Sometime between May 4- 8, 2020, Lasalo was seen by three police officers in the village of Lepuapua across from the Faasa’o Marist High School at around 7p.m. He was riding in a bicycle heading westbound. The three officers called out to Lasalo to stop but he allegedly sped away and fled.

Three weeks later, an off-duty officer contacted the TPS on June 15th around 4p.m and requested police assistance when he observed Lasalo picked up by a white truck in Nuuuli headed west.

Traffic Officers along with Vice & Narcotics officers proceeded to assist the off-duty officer, and followed the vehicle until it turned into the Pava’ia’i Haleck Service Station. Police units and the off-duty officer’s private vehicle attempted to block the white truck but unfortunately they were spotted before they got to Lasalo.

Lasalo immediately got out of the vehicle and ran towards the Tongan Community area behind the service station. Foot pursuit was then initiated into the bushes. The chase continued to the Canco Hill area for several hours where the suspect had disappeared into the bushes.

Officers then continued the search in the location where the suspect was seen again on his way back down to the main road. Two officers chased after him and he continued running, this time into the banana plantation across from a residence in the Pava’ia’i area. Foot pursuit continued for at least two and half hours — and was then called off.

After that day, Lasalo was not seen again and the search was officially called off until further developments.

On Aug. 6th around 1:40p.m, another off-duty police officer who was riding in his own personal vehicle heading south of Aoloau hill saw Lasalo at an old concrete building structure near a church. He was standing and was facing south. The off-duty officer easily recognized the suspect.

The off-duty officer parked his vehicle and got out quickly, unfortunately Lasalo saw him and immediately jumped the cliff to avoid being arrested. A few moments later, another officer arrived at the scene and both walked down the cliff to track where the suspect went.

Several officers along with Vice & Narcotics Unit officers arrived at the area where they climbed up the cliff in an attempt to block the suspect from going further down. It took three and a half hours for officers to sweep the terrain. Due to bad weather (rain and fog) the search was called off.

Again, Lasalo was nowhere to be found.

The next morning on Aug. 7th, construction workers fixing the road in Mapusaga flagged down a police unit and informed them that Lasalo was in the area. Officers went to the location where Lasalo was seen in an effort to arrest him, however, Lasalo quickly ran away after he saw police officers coming. He ran into the bushes in the Pavaiai area and was nowhere to be found.

A few hours later, the foot pursuit continued when Lasalo was seen in the same area by other police officers. Back up was called for and Lasalo was ordered numerous time by officers to stop but he refused and continued running.

Back up arrived and they spread out towards the Mapusaga village and the borders of Pavaiai in an effort to find the suspect. Based on the statement from members of the Mapusaga village, the bushes lead to the village of Pavaiai near the elementary school and the Tongan Community area behind the Haleck Service Station.

Shortly thereafter, Lasalo was spotted down in the Pavaiai area and he was chased by several officers but Lasalo ran into the bushes again.

One hour later, Lasalo was spotted again on a different side of the area, this time in the Faleniu area. He was chased by several officers again but he managed to run into the bushes and was nowhere to be found.

Few hours later, residents of Iliili called 911 and reported that Lasalo was seen in their area running on the road with a machete.

The search was called off and all officers proceeded back to the TPS for debriefings to figure out what route they needed to take in order to arrest their suspect.

Lasalo was spotted near the golf course on that same day. Several officers responded and the search started once again. Lasalo was chased into the bushes and when he got near an abandoned house he entered it in an attempt to hide from officers.

A police officer then rammed through and broke a wall to get to the defendant immediately before they lost him again. Another officer assisted and Lasalo was finally apprehended.