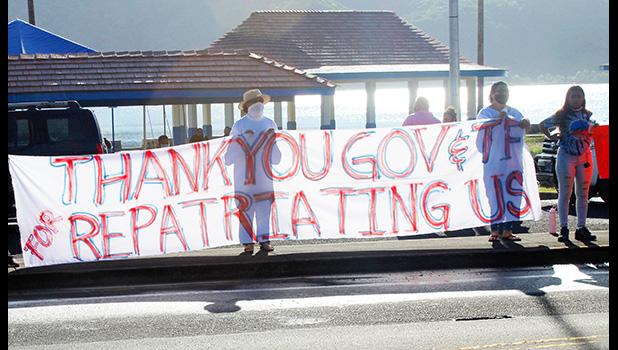 Pago Pago, AMERICAN SAMOA — Local members of the Tagata Tutu Fa’atasi Alliance of American Samoa (TTFAAS) and some of the 159 repatriated passengers, who returned home on the first-repatriation flight say THANK YOU during a wave Friday morning.

“THANK YOU GOV & TF FOR REPATRIATING US,” declared this large banner, as motorist honk car horns, during the usual busy morning traffic. The “TF” on the banner, refers to the ASG-COVID-19 Task Force.

TTFAAS member, Feo Lagafuaina, who was one of the 159 repatriated passengers on the first flight, explained in a Samoa News interview Friday at Suigaula o le Atuvasa Park in Utulei, that the wave is two-fold.

Number one purpose, she said, it’s “our way of thanking” Gov. Lemanu Peleti Palepoi Sialega Mauga, Lt. Gov. Talauega Eleasalo Alo, the task force, “our leaders and our people for starting to bring our people home.”

“Fa’afetai, fa’afetai tele lava,” said Lagafuaina, who further explained that the second reason for the wave is that, “its our way of making sure that, our Alliance,  our people, our government do not forget about, the hundreds of stranded residents [off-island]”.

The next repatriation flight is set for Mar. 10th. See Monday’s edition for details.