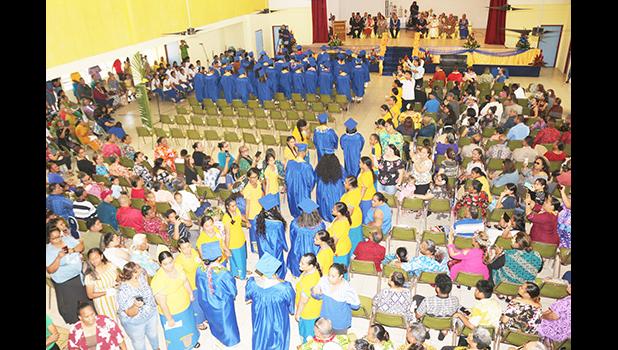 “When you leave here. Don’t forget why you came” ~ Adlai Stevenson
By
Tony Gasu
tony@samoanews.com

Pago Pago, AMERICAN SAMOA — One of the first schools to host their commencement ceremony for the closing of their school year was the Fa’asao Marist High School, who said their final farewell to 77 graduating Seniors on Saturday, June 5, 2021 at the Catholic Diocese of Samoa Hall in Fatu-O-Aiga.

Lt. Governor Talauega Eleasalo Ale was the keynote speaker at the commencement ceremony for FMHS, home the Crusaders and Cougars, offering his take on their theme, “When you leave here. Don’t forget why you came.”

Commencement speaker was the American Samoa Department of Education Director, Talauega Dr. Samasoni Asaeli who pointed to the theme as an important message for today, “more than ever, as young people are starting to lose their identity to many distractions in life.”

“Whatever your journey, do not forget why you came, do not forget where you’re from, who helped you along the way, and the reason why you are here today – All of you have different identities developed through variant life experiences that define who you are today.”