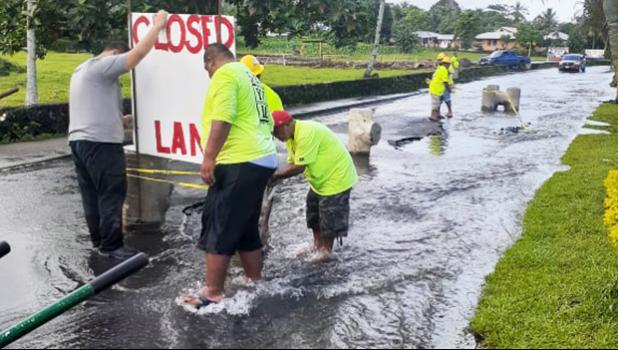 Pago Pago, AMERICAN SAMOA — Public Works crew seen Monday afternoon putting up a warning sign on lane closure at the damaged section of the Fagaima Road next to the Fagaima Methodist Church.

Heavy rain during the early morning hours on Monday this week, caused severe flooding in pocket-areas across the island including Fagaima Road, where by daylight — damage to the road could be seen, as the runoff water continued flowing.

During the day, some motorist weren’t aware of the damage to the road, and either had to turn around or slowly drive through this dangerous area.

Tualauta Rep. Larry Sanitoa, who was contacted by Fagaima residents and motorists, went to visit the area and also requested Department of Public Works to use a  safety device to warn motorists of this dangerous area until it’s fixed.

With a bit of improved weather Monday afternoon, DPW crew went to the site to put up the lane closure sign at the damaged section of the road, while there was still a lot of run-off water. (Sanitoa went back to the site during the sign closure installation.)