Faipule calls for vaccinating passengers on repat flight before arrival 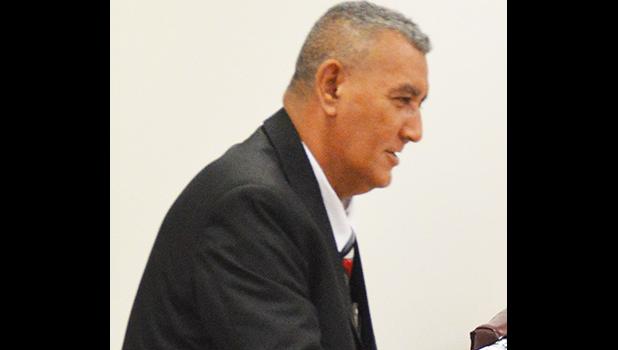 Pago Pago, AMERICAN SAMOA — To assure the safety of American Samoans from the deadly COVID-19 virus when the first repatriation flight arrives in the territory next Monday, Feb. 1, 2020, Aua Representative Faimealelei Anthony Fu’e Allen has petitioned the House Speaker for a chance to send 200 vials of the Covid-19 vaccine to treat all passenger on the first repatriation flight before they come to American Samoa.

Faimealelei said in open session that according to information he has heard, the virus is spreading inside the hotel where the 161 people are quarantine in Honolulu and that makes him very concerned about the safety of our people in the territory.

He said that nothing can be done at this point to postpone the flight because government leaders have already made the decision. However, to make sure that the passengers are well protected and secure from the virus, they should be given the COVID-19 vaccine before they come home. He said that the territory has enough supply of COVID-19 vaccine, so the 200 doses of COVID-19 vaccine could be transported to Honolulu through the air cargo that arrives on Saturday.

Vice Speaker Fetu Fetui Jr shared Faimealelei’s same concern. He told representatives that he’s also concerned for the safeguard of our people — especially the young children and the elderly.

He said he’s not sure if the information he received is right but a lady contacted him from Honolulu this week and informed him that she, along with her parents who are part of the passengers for the first repatriation flight had already received their first dose of COVID-19 vaccine.

“My dear fellow representatives, I believe that the actions by our leaders with the help of our Task Force to bring our people who had been stranded off island for many months is going smoothly through the help of our Heavenly Father. Give our hope and trust that God will protect American Samoa,” Fetu said.

Fetu was one of the many faipule who voiced their concerns regarding the safety of our people after the Task Force revealed their plan for the first repatriation flight. However, with just a few more days before the flight arrives, he now supports Faimealelei’s  proposal, saying that God will never forsake American Samoa.

House Speaker Savali Talavou Ale acknowledged Faimealelei’s recommendation and said that he will bring up the issue during their meeting with the governor and the senate president.

Concerns were raised in the House Chamber throughout this week after the Task Force revealed the issue about five people removed from quarantine in Honolulu last week after testing positive with the virus. The people are still under the care of the Hawaii State Health Dept., and the total passengers for the first flight has been reduced from 166 to 161, according to Motusa T. Nua, acting director of Department of Health and also a member of the Task Force.

The Task Force further revealed that the flight is scheduled to arrive in the territory from Honolulu on Monday, Feb.1st and the travelers will be taken straight to the Tradewinds Hotel to begin the strict 14-day quarantine.

Motusa told Samoa News that the target set by the Task Force is to vaccinate about 10,000 people before the arrival of the first repatriation flight from Honolulu next week.

Another 1,000 Moderna vaccine units arrived this past Saturday and according to Motusa, about the same quantity is expected to arrive on this Saturday’s cargo flight.

Vaccination of the largest tier group, the16 years olds and above started last week and will take the next few weeks. The vaccinations at the Tafuna Health Center are from 8am to 6p.m Monday, Wednesday and Friday and on Saturday from 8am to noon.