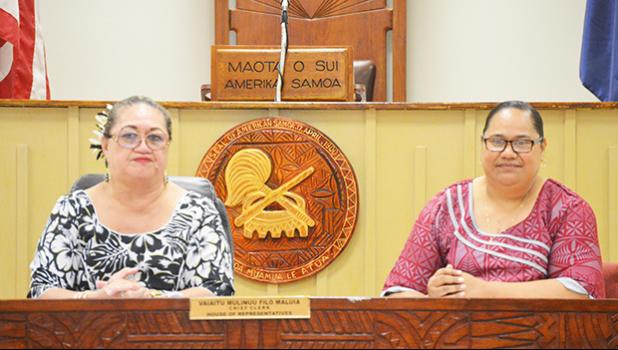 This is the same issue raised by several faipule during an earlier House hearing, and was raised again by Titiali’i during the House Budget hearing this Tuesday when the Budget Director, Catherine Aigamaua-Saelua and Acting Director for the Department of Education (DOE) Dr. Roxanne Sua’ava Salave’a appeared before the committee to testify regarding the issue of salary increases for teachers. (See separate story.)

Titiali’i directed the witnesses to carefully look into the many issues of which, the Department of Human Resources (DHR) is not aware. For example, if they look at the DOE, there are three deputy directors.

“My question is, does DOE really need these three deputy directors?” Titiali’i asked.

Concerning the issue of directors not yet confirmed, Tuala-uta Representative Larry Sanitoa has urged that the Fono take a stand regarding this issue and demand that the law be followed.

He asserted that if the administration does not submit the directors of these agencies for confirmation, the Fono can refuse to approve their budgets. These are the heads of agencies that the governor has not submitted to the Fono for confirmation. He said that the law is already in place and everyone including government leaders need to follow the law.

Examples of agencies which have not had their directors submitted to the Fono for confirmation include: Office of Public Information; Criminal Justice Planning Agency; Environmental Protection Agency; Office of Disaster Assistance and Petroleum Management; Property Management and the Territorial Energy Office.

Rep. Sanitoa strongly encouraged the Speaker and the House to take a stand and ensure that the administration adheres to the law regarding confirmation of directors for these offices and agencies.

He said the House can refuse to have any directors who have not been confirmed testify at the budget hearings. Sanitoa was adamant that the law was clear and the Fono should insist that the administration follow it.

The Speaker said the Fono will have to address this issue when the unconfirmed directors appear for their budget hearings.

He also noted that just one department director whose name was submitted for confirmation has yet to be confirmed, but all others have been approved. He was referring to the Director of Youth & Women Affairs Salote Aoelua Fanene who has been off island for medical treatment since February.

In February, House Speaker Savali Talavou Ale wrote to Governor Lemanu Peleti Mauga regarding this issue. He said that the Fono was already halfway through the first regular session and was hoping to have all cabinet and offices that require confirmation go through the process before the session adjourned.

“This is not a new issue and I understand the administration’s position with respect to confirming these office heads,” wrote the speaker. “However, past administrations have always yielded to the law and its requirements. The heads of the offices and bureaus described in 4.0112 require confirmation.”