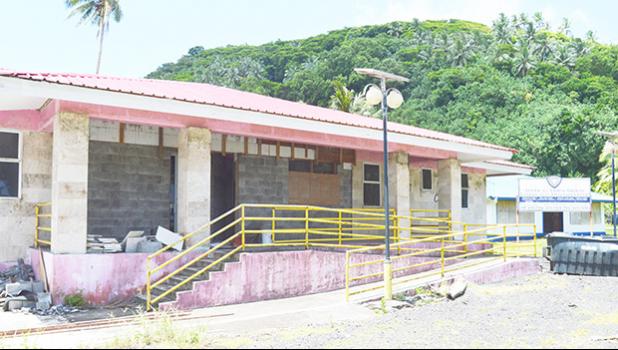 Pago Pago, AMERICAN SAMOA — People living in the Eastern District are calling out to the new Administration to use any remaining funding from the more than $164 million allocated to American Samoa under provisions of the federal CARES Act to complete the renovation of the Amouli Community Health Center, and the issue was taken up in the House this week with several representatives asking for a complete report on how CARES funding was spent in the previous administration.

Lavea said that for years people living in the eastern district have faced the problem of no hospital service, as the Amouli Health Center has been under construction for many years and the construction work is still not completed.

“We need a hospital with nurses and doctors for people living on the eastern side of this island,” Lavea said, adding, “If someone from Onenoa or Tula needed medical attention, it would only take 15 minutes to drive from their house to the Amouli hospital.”

As the territory is preparing for any positive cases of coronavirus that may enter our shores, Lavea pointed out that a hospital in Amouli would be a helpful place for people living on the eastern side.

A resident of Tula spoke to Samoa News saying that “our government received millions and millions of dollars to help prepare our country for any positive case of coronavirus by building facilities for testing and renovating local hospital facilities including our three Dispensaries such as Tafuna, Leone and Amouli, however, I was shocked when I visited our Amouli Health Center this week and found out that the facility is no longer in use.”

According to the resident, a retired teacher of over 37 years of service, people residing in the East side need the Amouli Health Center in times of emergency.

While an elderly mother from Aunu’u shared the same thought when she spoke to Samoa News this week. She said that her granddaughter suffered a fever and because they were without help from an EMS ambulance or a nearby hospital, they had to borrow their neighbor’s vehicle to transport her granddaughter to the LBJ Medical Hospital late at night.

“We really need a hospital on this side of the island so that people residing on the eastern side will quickly receive medical treatment whenever its needed,” the elderly woman said, adding that “I’m hoping that our new administration will come up with funding from somewhere to complete the renovation of the Amouli Health Center before the end of this month because we really need this service.”

Last year before the last Fono session closed, Tualauta Representative Larry Sanitoa asked then Treasurer if construction of facilities and roads were allowable costs under the CARES Act. The Treasurer responded yes — if the buildings are used for COVID-19 response, such as to quarantine people, it’s allowable; and if roads are connected to the care of such people it’s also allowable.

Samoa News notes that the Department of Health received $6.6 million from the COVID-19 grants.

Rep. Lavea also pointed out the importance of a fire truck and enough police units for the Fagaitua Police Substation (FPS) for the Eastern district.

He said that there are only two police officers occupying the FPS with one police unit.

He further stated that if a house is on fire, by the time a fire truck from the Fagatogo main station arrives the house is already gone.

“A lot of people from Aunu’u have lost their lives in the sea due to the lack of DPS Marine Patrol services in Aunu’u. I understand that funding is the main problem but let’s keep in mind that prevention is better than a cure,” Titiali’i said.

Regarding COVID-19 funding from the CARES Acts, Tualauta Representative Larry Sanitoa is asking the new administration for a report regarding the CARES Acts funding expenditures, along with other revenue reports from the government for the FY 2021 First Quarter.

Sanitoa stated that the Fono needs to review reports on how the CARES Acts funding from last year was used because there is a new stimulus package on its way and the Fono also needs to know from the new administration how they’re going to spend the new stimulus funding.

Last year before the last Fono session closed, Sanitoa asked the reason why the American Samoa Government (ASG) has not submitted the $164.6 million in COVID-19 grants awarded to ASG to the Fono for review as required by law.

The question was asked during a House Budget and Appropriations Committee hearing where Sanitoa stressed that the Budget Act requires all new funding to be appropriated by the Fono.

A complete report of the awards and spending dated August 4th was distributed during the hearing, where representatives were able to review the report and express their thoughts.

During this week’s House session, Aua Representative Faimealelei Anthony Fu’e Allen is asking the Vice Speaker for a House Resolution requesting Gov. Lemanu Palepoi Peleti Mauga to consider a representative from the Fono as a member of the new COVID-19 Task Force.

Faimealelei told representatives that he has already visited the facility at the LBJ Hospital where the construction work is still underway and there’s a lot of work that needs to be done before the first repatriation flight from Hawaii arrives.

“It was after my assessment that I realized the facility at the LBJ Hospital is not ready,” Faimealelei said.

“I’m not talking about politics, I’m talking about the safeguarding of lives of our people including our young children and our elderly parents who will easily be affected if someone tests positive with the virus.”

With regards to the new COVID-19 Task Force, Faimealelei said that he was shocked to learn that members from private sector are now serving on American Samoa’s newly constituted task force.

He then requested a House resolution to inform the governor about the importance of having a Fono representative on the task force so that the Fono would be updated on all preparations for the upcoming repatriation flights from Hawaii.

“I’m not against the plan of bringing our people back home but I’m voicing my concern of the current situation of facilities where passengers will quarantine when they arrive. We need to make sure everything is ready and in order, before they allow our people to return home,” Faimealelei said.

Rep. Avagafono Vaimaga Maiava echoed his colleague’s concerns about the arrival of the first repatriation flight from Hawaii before the end of this month. He stated that everyone should start to practice social distancing.

He stated that people are speaking about how they are scared of the virus but no one has bothered to enforce social distancing in all public places including stores, government offices and even the Fono.

“We have to practice social distancing,” Avagafono. “We have to start from here and someone has to step up and start it.”

One House representative told Samoa News that he’s worried because some of the new members in the task force including members from the private sector don’t have any medical experience on how to make solid decisions when it’s needed; while another said that he would really like updates as to where American Samoa stands in preparation for that first COVID-19 affected patient, then the many more which would surely follow.

Questions were also raised as to why the name of the Medical Director, Dr. Iotamo Saleapaga was removed from the list — seeing he’s one of the most qualified members who could give out medical advice.