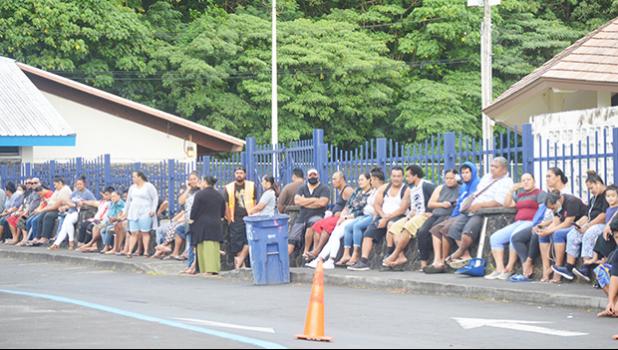 Pago Pago, AMERICAN SAMOA — Just after 7a.m yesterday, Samoa News observed a very long line from in front of the Gov. H. Rex Lee Auditorium through the front of the Samoana High School gym yesterday with residents, waiting for the auditorium to open at 7:30a.m. for the distribution of Advance Child Tax Credit checks for tax payers, who do not have a mailing address on their tax returns.

A statement released by ASG Treasurer earlier this month announced that more than $13 million was to be disbursed yesterday for 6,700 taxpayers with qualifying children who filed their 2020 American Samoa tax return from January 1st to July 31st of this year.

This is the first payment under American Samoa’s share of the advance child tax credit funded through the federal American Rescue Plan Act of 2021.

No date is confirmed yet for the December distribution.

Those who have a mail address were able to pick up their checks from the Post Office, which had slow traffic yesterday. The other option — which many taxpayers took advantage of — is direct deposit into their bank account.

The lines at the Territorial Bank of American Samoa branches in Tafuna and Utulei were long throughout the day. ASG’s checks are issued from their TBAS account.