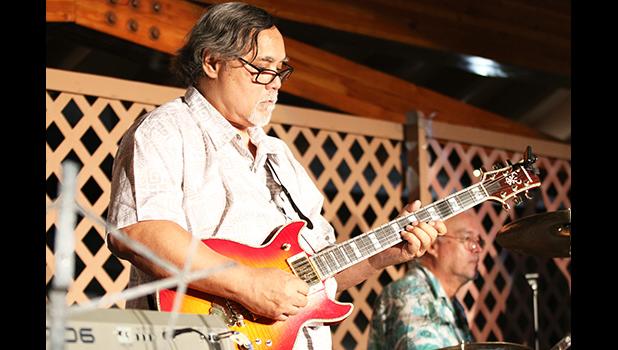 By
B. Chen
blue@samoanews.com
Exclusive by Off Da Rock will grace the runway with their “Winter in The Islands” Collection

Pago Pago, AMERICAN SAMOA — If your idea of a great weekend includes smooth sounds, a jaw dropping fashion show, and fun with friends - then you’re in luck.

It’s all happening Saturday night — at the Fatuoaiga Hall.

Fantastic Voyage 2019 is proud to bring together under one roof - after 30 years — the Coral Lounge Band. Local musicians, young and old, will take the stage in an event that aims to raise funds for two very deserving causes — LBJ Medical Center staff members and The American Samoa Golf Association.

Event coordinator Milo Sili, owner of events by Milo, told Samoa News yesterday that the primary goal of the concert is to ‘reunite’ seasoned local musicians, “a recap of that ol’ skool band” vibe.

For the hardworking staff members of LBJ, a raffle featuring prizes donated by various sponsors will be carried out, with funds collected from the raffle going towards them.

For the ASGA, the group will be manning a bar to raise money for their participation in the upcoming XVI Pacific Games in Samoa.

Featured performers are dedicating tomorrow’s show to their fellow musicians who have passed on: Fagafaga Daniel Langkilde, Pat Tervola, Chico Pouesi, Harry Miller, Harold Siufanua, JR Scanlan, and others. It will also serve as a tribute to long time drummer, Francis Leleua, who is unable to perform.

As of yesterday afternoon, Milo said there were only a few corporate tables left. Tables are selling for $700 for 6 people while general admission is $25 prepaid, and $30 at the door.

“We just want to thank our sponsors,” Milo said. “Without them, none of this would be possible.”

One of the highlights of tomorrow’s event is the much-anticipated fashion show, presented by Joe and Leila Ioane, and the crew of Exclusive by Off the Rock.

The Ioanes recently showcased their customized elei pieces at LifeCon - a fashion show that was hosted in neighboring Samoa last month — and much of the same collection will be featured tomorrow, “because not everybody was able to travel to Apia,” Joe told Samoa News yesterday.

According to him, Exclusive by ODR will be showcasing 15 pieces, a mixture of customized items and some from their “Winter In The Islands”’ collection, which garnered rave reviews in Samoa during LifeCon.

“Our show will include girls’ dresses, evening gowns, and high-end elei fashion, uniquely printed with tatau motifs,” Joe explained, adding that one of their goals is to ‘build confidence’ in young people.

“We are using local models, local make-up artists, and local hair stylists. We want them to walk away from this with a sense of pride… more confidence than they came in with,” he continued.

Audience members who see something they like during the fashion show can get a ‘customized’ piece created by the Ioanes, who are currently taking a breather following the busy prom season.

“Proms and weddings are the biggest things for us every year,” Joe explained. “Our annual fashion shows are our way of highlighting what we have, and giving people a glimpse of what they can look forward to, the following year.”

Exclusive by ODR has been in business since 2016. What started off as a small elei joint has grown to become a worldwide sensation, with people of all ethnicities — from all over the globe — placing orders for elei-inspired evening gowns, aloha shirts, kids clothing — even neckties and vests.

“Our focus is to promote what we have here, to the outside world,” Joe said. “We have to stay relevant.”

Tomorrow’s event kicks off at 5 p.m. with seating and cocktails. Call 252-5055 for more information.