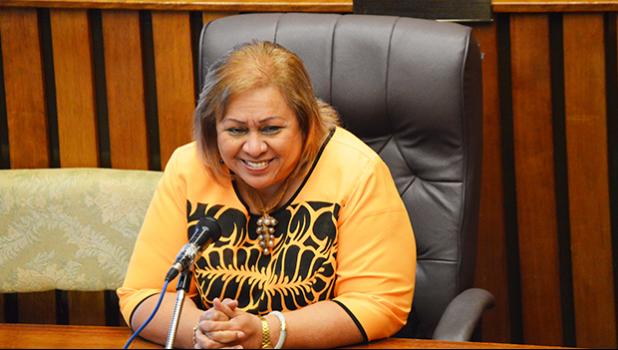 Despite thorough explanations provided to farmers about requirements of the school lunch program, Chief Procurement Officer, Dr. Oreta Mapu Crichton says there is still criticism from farmers, some of whom have made complaints when not happy with how the four different farmer co-ops are operating.

“We try our very best to meet all the needs of the farmers. That is what we are out there to do,” Crichton said during a recent House Agriculture Committee hearing, after lawmakers had, again, received complaints from farmers about not being given a chance to supply the federally funded school lunch, overseen by the local Education Department.

“So why are our local farmers complaining?” Tualauta Rep. Vui Florence Saulo asked, and noted that this is not the first time that the House has held hearings on this same issue between farmers and the school lunch but there are still more concerns and complaints from farmers.

“That is my question also,” was Crichton’s response, adding that she believes that if a farmer does not agree with something, complaints follow. She said Procurement has been bombarded with complaints, but it’s up to the farmer whether to be a part of one of the farmers’ co-ops or deal directly with Procurement when bids for local produce go out for the school lunch program.

“We also take time out to talk with a farmer who brings in a complaint,” said Crichton, who agreed with the committee’s characterization that the co-ops act as a broker for their members and the co-ops operate like a business, which represents its members.

Also attending the House hearing was Education director Dr. Ruth Matagi Matagi-Tofiga, who explained ASDOE’s role in the school lunch funding from the US Department of Agriculture that also provides specific “compliance” issues of how the money is to be used.

She said total federal funding is $12.4 million and out of that amount about $2 million last year went to “local produce” comprising locally grown produce (such as taro, bananas and vegetables), while this year, that amount is reduced to $1 million. The rest of the annual funding covers other matters like other food items for school lunch. She informed lawmakers that ASDOE is prepared when the time comes that funding faces a reduction down the road.

Leasina Rep. Gafatasi Afalava noted with concern that there is now more than one farmers’ co-op and it has caused conflict with farmers.

Crichton said Procurement has worked on a process that would satisfy farmers, but there are still complaints. She said any farmer can come directly to Procurement to fill out the paperwork if that farmer wants to bid in the school lunch instead of joining a co-op.

However, she said they have encountered farmers who don’t want to deal with the paperwork and the reason they join one of the farmers co-ops, whose leader then handles all of the paperwork as well as the distribution of produce pounds to its membership for the school lunch.

When asked by the committee, Crichton acknowledged that the co-ops do operate like a business and the leader of the group — or the person who heads the co-op — takes a share of what the co-op gets for the school lunch.

“Some farmers are unhappy with the leader taking a share, and some farmers show up at our office, with their complaints,” she said. “We recommend to the farmer that they themselves can deal directly with Procurement.”

The farmer who wants to bid for the school lunch can register with Procurement for the bid process, provide a list of the produce to supply, along with the number of pounds as well as a bid cost offer. And again, the farmer must be certified by Agriculture.

She also told lawmakers that the pounds for each type of grown produce is based on the menu from the school lunch program.

She gave the same explanation during House hearings last year as well as during meetings with farmers, some of whom appear not be satisfied and continue to complain to lawmakers.