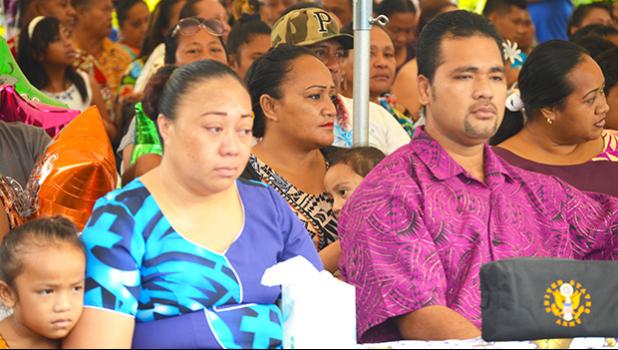 Pago Pago, AMERICAN SAMOA — The father of Tinian Makewijere Tuileto’a Toese broke his silence yesterday morning saying that he was hurt by some of the statements made by teachers from the Pava’ia’i Elementary School, regarding the tragic incident that led to the death of his daughter last week.

“My heart hurts. I cried everyday and I can’t sleep well at night. I always remember her smiling face and her sweet voice when she sang inside our church,” said the father, Sililo Toese, during an exclusive one on one interview with Samoa News yesterday morning.  This is the first time he has spoken out since the death of his eldest child last Wednesday afternoon when she drowned during a class outing at the Pala Lagoon Swimming Center.

According to the grieving father, “No one called my wife or myself to inform us about when the incident happened. It was not until last Sunday evening around 8p.m. in the evening, that the school principal and teachers appeared at our home during the evening prayer for my daughter. Between Wednesday and Sunday, nobody bothered to come to us and tell us what happened at the swimming pool, and it’s a signal that they just don’t care about my daughter and even us, her parents,” the mourning father told Samoa News.

“After the last prayer, one of the teachers knelt down in front of our family and apologized to us. I immediately stood up and told her to stand up. As our family spoke with the principal and teachers, our family was also told that it was part of their prayer service that they have to perform a “ifoga” (traditional apology) to the family and to us, the parents of Tinian,” Toese said.

The school provided one big fine mat and monetary gifts as part of their ifoga.

According to Toese, the extended family accepted the ifoga because their family feels that it is part of a Christian life to forgive and forget the past. However, the fine mat and the monetary gifts were given back to the school — to take back with them.

Toese told Samoa News that according to one report they received from the school, his daughter’s behavior on the day of the class outing was out of control, which resulted in her drowning — because she did not listen. Another report stated that she was sick, while other reports stated that EMS personnel discovered his daughter’s body floating in the swimming pool.

According to Toese, these conflicting reports and statements from the school gave his whole family the thought that teachers are trying to hide something that was important, instead of letting the truth out so that their family could know exactly what really happened on that afternoon.

On the day of the incident, Toese had already spent one week at the hospital, due to one of his children being admitted. His aunty accompanied him to the hospital on that day. He then overheard his aunty’s conversation with his wife on the telephone, saying his daughter was in a critical condition at the LBJ Emergency Room (ER).

“Once I heard the story about my daughter, I just left my sick son and my aunty at the Surgical Ward, and rushed to the ER to see my daughter. I was speechless when I opened the door to the ER and saw my daughter lying on the bed … It was then I could see that my daughter was dead,” Toese said with tears on his eyes.

“My heart was broken into pieces when I first saw my sweetheart lying … on that bed, and I will never forget that moment. It still is in my eyes right now. I wish I could help her and bring her back to life. It was really hard to look at her, lying on that bed. I cried that day and I cried loud. I didn’t care who saw me on that day, all I wanted at that moment was my Tinian to be alive, unfortunately, God had other plans for her.”

Toese described Tinian as someone who performed both women’s and men’s duties inside their family. She was his right hand for everything in the family. She loved her young siblings and she never hurt anyone of them. She loved to sing in the church, and also she loved to be a part of the Youth Program at the church, memorizing each Sabbath memory verse.

The American Samoa Department of Education (ASDOE) is conducting their own internal investigation into the incident that involved teachers and students.

“DOE is also conducting interviews on the incidents, and will take as long as they need to get all the answers, before disciplinary action will be taken,” according to a press release from the ASDOE Director, Dr. Ruth Matagi-Tofiga. The director said that ASDOE is grieving for the Tuileto’a and Toese family that is experiencing what no parent should experience, “the loss of a child.”

“The parents expect their child to be safe while in our care. This is just a real tragic situation. DOE is revisiting off campus and field trips activities to maximize educational benefits and ensure the safety and protection of students. We are also addressing the role of the teachers in providing competent instruction and supervision for off campus activities are mandatory,” Matagi-Tofiga said.

According to the press release, the Department of Public Safety (DPS) is investigating the incident and the ASDOE director has welcomeD the investigation. DOE is also conducting their own investigation including interviews and will take as long as they need to get all the answers, before disciplinary action will be taken.

She said that the Principal of Pava’ia’i Elementary School along with the teachers and staff performed the traditional ifoga to the family of the young girl.

“I have also met personally with the parents and grandfather and offered my condolences. Our deepest sympathy is extended to the parents, grandparents extended family and loved ones. I ask the community to please keep the family in your thoughts and prayers,” the press release concluded.