Feds ask for no bail for US citizen wanted in Tonga 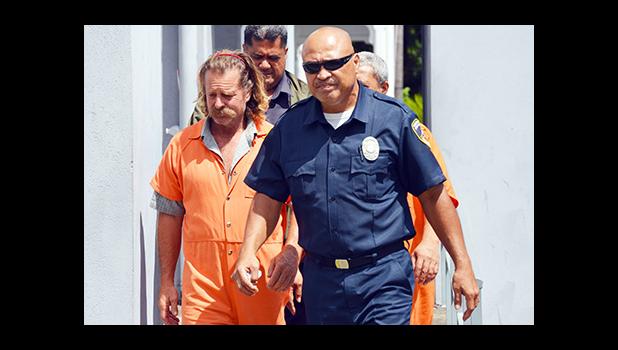 Describing the fugitive as a flight risk and a danger to the community, US prosecutors have asked the federal court in Honolulu to detain without bond a US citizen wanted in Tonga for the alleged murder of his wife.

Dean Jay Fletcher, who turned 54 years old this month while in custody in American Samoa, was taken from Pago Pago to Honolulu early last week by agents of the US Marshals Service following a diplomatic request from Tonga to the US Justice Department for extradition.

Since his arrival in Honolulu, Fletcher has been in the custody of the US Marshals Service.

In a new motion, Assistant US Attorney, Larry Butrick argued to detain “the fugitive” pending resolution of the extradition proceedings to return him to Tonga. Butrick further argued that a “strong presumption against bail is supported by a host of factors.”

Among them, Fletcher is “accused of the brutal murder of his wife, which he is alleged to have committed by bludgeoning her to death in his boat in view of multiple witnesses.”

“This fact alone makes Fletcher a danger to the community, and dooms any request for bail he may make,” Butrick said.

The second factor, is that Fletcher has demonstrated that he is willing to go to great lengths to avoid responsibility for his alleged crimes, including attempting to destroy evidence of the murder by sinking a bloody sheet to the bottom of a Tongan harbor, and misrepresenting the circumstances of his wife's death to authorities.

Third, Fletcher has already been shown to be a flight risk, he said and noted that according to Tongan authorities, Fletcher twice escaped from custody. Fletcher was re-apprehended on the first occasion, but was successful in fleeing the Kingdom of Tonga by boat the second time despite pursuit by Tongan law enforcement.

(It was the second time that Fletcher was able to make his escape all the way to American Samoa and was arrested by local authorities on Oct. 3 for entering Pago Pago without authorization.)

“Because Fletcher is such a clear flight risk and danger to the community, the Court did not need to go further in order to deny any forthcoming application for bail,” Butrick said. “Allowance of bail in any amount would not guarantee the fugitive's presence in court and would invite the possibility of embarrassing the United States in the conduct of its foreign affairs.”

“Given Fletcher's dangerousness, it would also place the residents of this judicial district at risk,” he said and noted that should the court be inclined to grant bail, the government requests that the court submit special findings as to those specific matters that are found to constitute ‘special circumstances’.”

Moreover, in order to protect the ability of the United States to meet its treaty obligations to the Government of the Kingdom of Tonga, the government requests that the court notify the parties a reasonable time in advance of any contemplated release order so that the federal government can consider the matter of whether, under the circumstances, to seek a stay pending possible appeal on the bail issue.

The Associated Press reports that Tonga officials have two months to provide authorities in Honolulu with extradition documents. It will be up to the U.S. Department of State to determine if he'll be extradited, said Butrick.