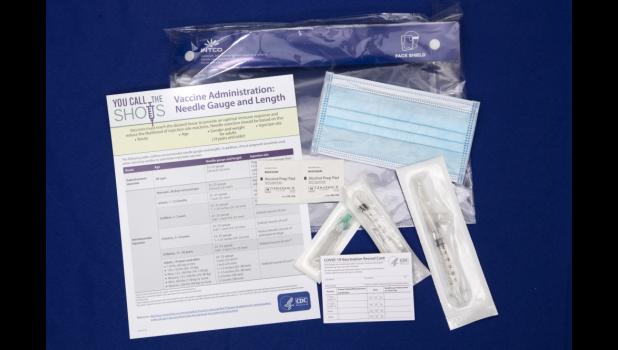 By
Lisa Simunaci, Office of the Secretary of Defense Public Affairs

Washington, D.C. — Operation Warp Speed is finalizing plans with the most critical component in its vaccine delivery strategy – the 64 jurisdictions and five federal agencies that ultimately decide the destination of COVID-19 vaccines.

“Jurisdictions are empowered to direct where vaccines will go and we will deliver it where they tell us,” said Operation Warp Speed Chief Operating Officer Army Gen. Gus Perna.

“Simply said, but very difficult to execute – we are asking jurisdictions to do the microplanning for distributing the vaccine down to actual administration – that is shots in arms,” Perna said.

The operation’s mission is to accelerate the development, manufacturing and distribution of COVID-19 vaccinations and therapeutics to the American people.

On a recent call with governors, Perna told state leaders that vaccine distribution was in their control. The call occurred as the nation anticipates the Food and Drug Administration may soon grant Emergency Use Authorization for a COVID-19 vaccine.

Perna said he expects about 40 million doses could be available by the end of December.

“This is your decision,” Perna told the governors. “As long as the provider is enrolled, we will deliver to that location. We will not constrain you.”

He noted it was important that providers are enrolled in the Vaccine Tracking System and validated by the states.

Jurisdictions will designate vaccine delivery locations – whether it be to hospitals, doctors’ offices or pharmacies.

“We can deliver to one location in a state or to 10 thousand locations,” Perna said.

With a recent decision to allocate vaccines pro rata, the available number of doses will be divided by jurisdictions’ population over the age of 18 and distributed accordingly.

The goal is fair and equitable distribution, Perna said.

For Operation Warp Speed, the 64 jurisdictions include the following:

Additionally, five federal agencies will be treated much like jurisdictions when it comes to allocations. Those include Department of Defense, Department of State, Bureau of Prisons, Department of Veterans Affairs, and the Indian Health Service.

Operation Warp Speed officials provided initial allocation numbers Nov. 20 to the 64 jurisdictions and five federal agencies so they can begin planning. While not definitive, the numbers provided were based on the best assessment of expected available vaccines at the time the FDA may grant an Emergency Use Authorization.

While Pfizer and Moderna have both reported promising early results, leaders are presuming the Pfizer vaccine may be authorized first, with 6.4 million doses available in mid December. Just half of those doses will be initially distributed, ensuring second doses – required for the two-shot regimen – will be available 21 days later.

With limited doses, jurisdictions and federal agencies will determine, based on recommendations of the Centers for Disease Control and Prevention and Advisory Committee on Immunization Practices, how to prioritize administration of vaccines.

Weekly vaccine allocations will follow the initial push, with the expectation that the Moderna vaccine will follow close behind in the approval process and rapidly expand availability. Moderna is also a two-shot regimen with a 28-day span between doses.

Operation Warp Speed is using a software platform called Tiberius to allocate, distribute and track the vaccine. Tiberius provides vaccine visibility to jurisdictions and following the initial push, allocations will be loaded into the system weekly.

Tiberius allows jurisdictions to “scenario plan” where to send their doses, providing a framework to test their approaches. Jurisdictions have been exercising those plans as the delivery date inches closer.

“We’ve been working closely with the jurisdictions on planning with different artificial scenarios,” said Deacon Maddox, Operation Warp Speed’s chief of plans, operations and analytics. “At this point, we are all eager to rip the training wheels off and get going with the real thing.”

In close coordination with Operation Warp Speed, Pfizer will distribute vaccines directly from their manufacturing sites to the administration sites to reduce time in transit due to the product’s cold chain requirements.

“We have heard a lot of concern about the cold chain requirements as the Pfizer vaccine must be transported and stored at -94 degrees Fahrenheit,” Perna said. “But we have systems in place to manage this. Our ultimate goal is shots in arms, not vaccines in storage.”

In order to assist states, Operation Warp Speed has dedicated military logisticians to work with regional planning teams at the CDC who are in constant communication with jurisdictions. Information technology specialists are also dedicated to the effort.

“We are making significant progress and our team continues to communicate with the jurisdictions,” Perna said. “Additionally, I am personally speaking with leaders in every state. I have provided my personal contact information in an effort to break down barriers and instill confidence in our distribution proces