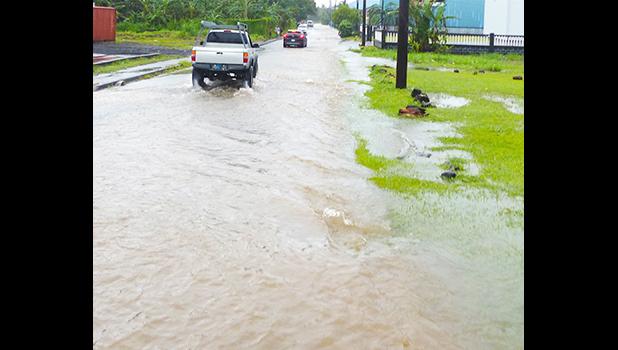 According to the congresswoman’s press release on the project, it was proposed by the American Samoa Department of Public Works, to construct a drainage system in the Village of Fagaima, which has flooded during storms and heavy rainfall, then reconstruct any roads and sidewalks disrupted by the effort. This project proposal has basis in the disaster declaration following Storm Gita, and the grant is pursuant to the Robert T. Stafford Disaster Relief and Emergency Assistance Act.

Congresswoman Uifa’atali received the official notice from the U.S. Department of Homeland Security's Federal Emergency Management Agency (FEMA). She noted that it is specifically — this grant of $3,165,018.9 — federal backing for the Fagaima Flood Mitigation project, covering 37 percent [of the cost].

Uifa’atali congratulated the Department of Public Works and Director Faleosina Voigt and all involved for this successful proposal, including DHS and FEMA in their recognition of the dire need for this project.

Flooding of the Fagaima area when it rains has long been a complaint by people who live in the area, as well as use the road everyday to get home, go to church, go to school(s), or even just to shop.

The proposed project is in southwest Tutuila Island, within the Tafuna Plain at Fagaima Village, Tualuata County. This project site begins at Route 019 and ends at an existing detention basin west of Route 014. The surroundings include commercial, residential, religious, and school buildings.

The project as designed would intercept streamflow of Leaveave Stream before it reaches the Route 019-Route 018 intersection, to allow for safe vehicular and pedestrian traffic, and prevent homes, villages, accesses, and driveways from being flooded.

The details of the Fagaima Flood Mitigation Project include the construction of an 8-foot wide, 6-foot-deep box culvert that would intercept runoff along Route 019 and convey it to an existing detention basin west of Route 014. That extensive new culvert would span approximately 0.8 miles in length, along with installation of 11 new collection or catch basins along the roadway to drain runoff into the new culvert.

The FEMA notice concludes that the effort would necessitate work with a backhoe and manpower to clear vegetation within the basin, with approximately one foot of ground disturbance anticipated for vegetation removal. The flow would go to the existing detention pond and eventually to an existing open channel east of Route 014 to the Pala Lagoon.

Construction of the drainage system would require the removal and then replacement of existing pavement, sidewalks, walls, and fencing along Route 019 and the potential relocation of existing utilities within the project construction area, which would consist of a 20-40-foot corridor centered on the new culvert. The project also would include improvements to existing access roads, driveways, and repairs to Route 019 and Route 014 following construction of the drainage system. All affected pavement, sidewalk, walls and existing utility lines would be repaired or replaced.

ASG has been looking at federal funding under a hazard mitigation grant program to address drainage problems in Tualauta since at least 2009, according to Samoa News archives.

Then in 2018 along came Tropical Stom Gita which “caused as much as $186 million in direct and indirect damages across the territory,” according to the 2019 American Samoa Economic Forecast and greatly exaserbated the flooding problem in the Fagaima – Ottoville areas.

In March of 2019 Tualauta Rep. Larry Sanitoa seeking info on the status of a mitigation project contacted ASG’s Office of Disaster Assistance and Petroleum Management (ODAPM) staffer Lima Fiatoa who revealed that “we are currently working on the Fagaima Drainage to be submitted within the coming week.” Additionally, “we have an opportunity to obtain funding” under Gita hazard mitigation funds.

Fiatoa also said at the time that ODAPM is working with an official at DPW, who is putting the application narrative together as well as “updating the project cost estimate as well as the Benefit Cost Analysis (BCA) to show FEMA that our project is cost effective.”

Sanitoa informed American Samoa Power Authority acting executive director, Wallon Young that ODAPM and DPW are working on an application for the Fagaima Drainage to be funded by Gita hazard mitigation funds.

Sanitoa also recalled a House ASPA Committee hearing where there had been mention of ASPA working on a Filtration System to support the Tafuna Wells.

“In knowing that, I recommended that perhaps ASPA would consider building a catchment pit or a reservoir at the source of the run-off water as part of the mitigation plan,” Sanitoa said.