Fight breaks out following a ‘debate over meth’ 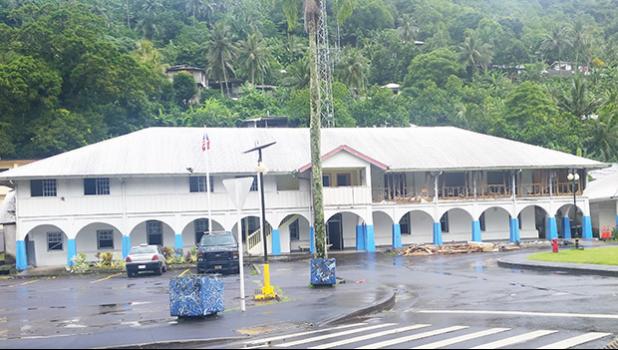 Pago Pago, AMERICAN SAMOA — Two men were hauled off to jail following an alleged fight that was sparked by an argument over meth.

Vincent Tofia Paopao and Lemasanimaleea Mapu made their initial appearances in District Court last Thursday. They are both set for pretrial conference on April 10.

Paopao was released on his own recognizance, under the condition that he remain law abiding, not leave or attempt to leave the territory without prior permission from the court, and remain alcohol and drug free.

Mapu, however, was remanded to custody with bail set at $500 as he had just been sentenced to 12-months probation the day before for public peace disturbance. (See yesterday’s Samoa News for details).

The two defendants are charged with public peace disturbance, third degree assault, and resisting arrest for an alleged incident that occurred on Feb. 28 near Iliili.

According to the criminal complaint, a fight had broken out and police were contacted for assistance. When they arrived, witnesses pointed to two men, who had fled the scene when they saw the cops coming.

The pair allegedly took the cops on a 30-minute foot pursuit which ended when Paopao was apprehended near his home. He was then transported to the Tafuna Substation for questioning. Afterwards, he was booked and confined at the Territorial Correctional Facility (TCF) to await the next sitting of the District Court.

The other man was later identified as Mapu.

According to witnesses, Paopao was yelling Samoan war cries and profanities when he was told that authorities were being contacted. Paopao had gotten into a fight with another male — the victim — who allegedly told police that he and Paopao had a verbal altercation following a ‘debate over meth’.

According to the victim, it was he who threw the first punch at Paopao, with a beer can. He said Paopao punched him back — with a beer can — and that’s how he ended up with a 1-inch laceration near his left eyebrow.

Police observed the cut near the victim’s eye and because it was a deep wound, he had to be transported to the LBJ Medical Center for treatment.

The criminal complaint notes that Paopao reeked of alcohol when cops picked him up. His speech was “slurred” and his eyes were “blood shot red”.

Not long afterwards, cops got another call from the same area. Police were notified that Mapu had just arrived home. When investigators made their way to the area, they found Mapu sitting in the front of his house. But he didn’t sit still for too long.

When he saw the police unit approaching, Mapu allegedly took off on foot — again. Cops chased after him and the 10-minute foot pursuit ended with Mapu getting a laceration on his left foot, and placed in a police unit.

The responding officer, in the court affidavit, said Mapu reeked of alcohol.