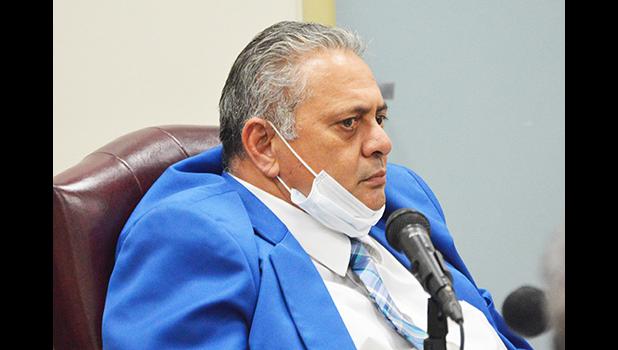 Pago Pago, AMERICAN SAMOA — The chairman of the House Human Social Service Committee, Rep. Su’a Alexander Eli Jennings has made it clear that the confidential file containing several documents that was circulated in the House chamber last week will not be part of the confirmation hearing for the acting director of the Department of Human and Social Services (DHSS), Muavaefaatasi John Suisala, which is now scheduled for 11a.m this morning.

He further stated, “This hearing is a confirmation hearing, not a criminal investigation or any sort of hearing to damage the character of anybody. This is strictly business.”

Speaking to Samoa News this week, the Faipule from Swains strongly believes that the way this confidential file entered the chamber violated house rules and protocol when it comes to the issue of soliciting reports and documents from government departments.

“I can described this move as personal and political and the reason why this file was brought into the House chamber right during the time of the confirmation hearing is to discredit the nominee,” Su’a told Samoa News.

He said that if this is a criminal matter, there is an Attorney General who can handle cases like this one. He doesn’t see any reason why the file was brought before his committee’s attention.

“I’m not an attorney and I can’t give out any legal advice,” Su’a said, adding that, “My role as a committee chairman is to make sure the confirmation hearing will only focus on the nominee’s qualifications. We’re not going to investigate any criminal act nor discuss any alleged crime during this hearing and I will request a brief discussion before the confirmation hearing to discuss this important issue.”

Speaking about documents contained in the file, Su’a said this is a federal program and these types of programs have their ways of doing things in terms of auditing and reviewing reports. He said that after reviewing the file, it looks like this has been going on for years now.

As a chair of the committee, Su’a said he would not request an investigation into this matter because that’s not the issue before the committee this week. He already sought advice regarding this issue and he has the right as a committee chair to stop the file from reaching committee members unless there is call for a criminal investigation.

“This has been going on within the department for many years but all of a sudden the file surfaces and is accidentally distributed to representatives without my approval as chairman,” Su’a said.

He said the file will not influence the outcome of the confirmation hearing. It appears that the motive behind the move to distribute the file in the House was to discredit the nominee and is a defamation of character.

Su’a said he respects the rights of all the individuals mentioned in all of the documents and that is one of the reasons why he doesn’t want to let the file be part of the confirmation hearing.

“This is very personal and political. It happens out there nationally in Washington D.C and it happens here also,” he said.

Speaking about the House rules and protocol, Su’a totally agreed that this move to distribute the file in chamber without the Speaker of the House’s knowledge violated protocol and House rules.

“The Speaker of the House needs to enforce House rules to avoid future problems because this file is not an official document. It is something that was secretly brought into the House,”

When asked who brought the file into the chamber, Su’a said, “I don’t know who did it. That’s why I announced it publicly that I did not solicit nor distribute the file.”

When asked for his response to the Vice Speaker of the House’s claim that he (Su’a) brought the file into the chamber, Su’a said, it was the Vice Speaker who showed him the file and later instructed the employees to make copies and distribute them to lawmakers.