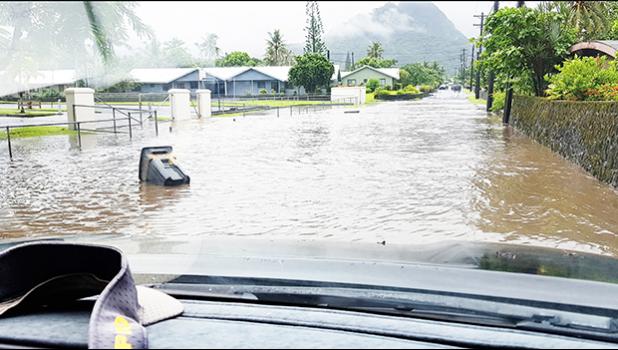 Pago Pago, AMERICAN SAMOA — This photo taken by a local resident shows a huge pool of water, on the road fronting The Church of Jesus Christ of Latter-day Saints in Ottoville, just after rain fell last Wednesday afternoon.

The drainage area went through a complete reconstruction last year, with the goal to prevent such a problem, but it remains unresolved during heavy rain in the past days.

Residents of the area and those who travel through this road (as well as Samoa News staff), have observed a lot of debris on the road, after Wednesday’s rain, including loose gravel/ cinder washed into the drain in this area from unpaved sections of the road-side dug up during the work carried out by Paramount Builders Inc., which was contracted by the American Samoa Power Authority for its underground cable project last year.

The photo was given to Rep. Larry Sanitoa, who has since requested help from the Department of Public Works in clearing the drainage area. Copies of Sanitoa’s email were also sent to ASPA acting executive director Wallon Young and Paramount Builders.

Sanitoa says that while the water had receded by Wednesday afternoon during his site visit, there was dirt and cinders all over the drainage area. (Samoa News staff also observed the same problem, along with a lot of cinders up the Ottoville road.)

The new drainage — in front of the church — has several compartment-slots that are easily accessible to the vacuum truck crew, according to an official with RM Construction, which completed the repair and improvements to the drainage area.

DPW is working to get the drainage cleaned, however, Young informed Sanitoa last week Thursday that a cleanup is necessary as soon as possible.

“The Ottoville Underground line project contributed to the problem to ‘some’ extent; I witnessed it myself,” Wallon wrote in an email response to Sanitoa. “ASPA has vacuum trucks and we are more than willing to provide them for the cleanup.”

The large pool of water was seen again last Friday morning during heavy rain but debris was still seen all over the Ottoville road, as well as Fagaima road.

The frequent rain has prevented any kind of clean up of the drainage area.

Another drainage problem in Ottoville, is the road in front of the cemetery. A large lake — frequented by frogs, starting at night-fall for their night-time bathing and swimming pleasure — forms every time there is rain. There have been several attempts to fix this area. Several residents use this road heading to Hope House, Fatuoaiga, and nearby schools.

Meanwhile, the temporary fix for drainage on the road in front of SAAB Pago store — across from the new two-story Haleck’s building (former classrooms of Argosy) — appears to be working very well. Heavy rains last week didn’t create a large pool of water, as motorists drove through without problems. Motorists have expressed their appreciation, especially those who face horrible flooding on roads in Ottoville and Fagaima.