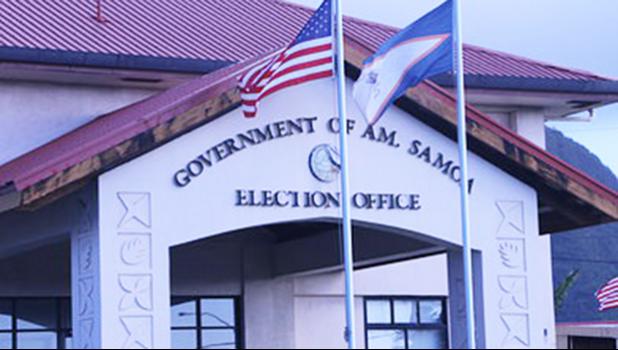 Pago Pago, AMERICAN SAMOA — A bill that would authorize the Chief Election Officer to propose procedures to enable voters currently stranded off island due to the COVID-19 pandemic to vote absentee in the November 3rd election was passed by the Senate last week.

The Senate bill, sponsored by Senators Faamausili Mau Mau Jr and Magalei Logovi’i was introduced in the House of Representatives last Thursday morning and a hearing with the Chief Election Officer is now scheduled.

The bill states that less then 3 months remain until the general election for governor and lt. governor, House of Representatives and Delegate to the US Congress — and flights to the territory remain suspended due to the COVID-19 pandemic.

It is believed more than 500 residents are awaiting flights to resume so they can return home — and many of them are registered voters, says the preamble of the bill.  “The qualified voters have a right to vote in elections, and so that the border closure does not inadvertently disenfranchise those stranded off island, the government must prepare a process for them to vote by mail.”

The bill grants the authority to voting officials and the government to provide ballots to those who have become unqualified to vote because government action prevents their ability to vote in-person.

New language has been added to Section 1. 6.0105 which reads: ”If a declared national or local emergency makes compliance with the provision of this title impossible or unreasonable, the Chief Election Officer is authorized to immediately prepare procedures to ensure the qualified elections who are caused to be disenfranchised are provided a ballot. The procedures shall be transmitted to the legislature for their immediate approval or disapproval no later than 60 days prior to any election for which the ballots are to be cast.”

It further states “…that the use of the procedures shall cease upon declaration by the executives that the emergency no longer exists.”

The bill becomes effective immediately upon passage by the legislature and approval by the governor.

Senators approved the bill in final reading last Wednesday and sent it to the House of Representatives for review.

In his letter to Fono leaders, Gov. Lolo M. Moliga said that the COVID-19 pandemic has compelled “us to navigate unchartered waters” and force us to find new operating schemes to address new challenges.

One of these fundamental rights, according to Lolo, is the “right to vote” in general elections satisfying one of the basic democratic principles granting them the freedom to cast their votes for the leaders of their choice.

The governor said that Title 6 of the American Samoa Code Annotated (A.S.C.A) accords and assures this right to every eligible and qualified resident voter of American Samoa. The law is also specific on the process and method with which this right is exercised.

“The COVID-19 pandemic raised the question whether the qualified voters as defined by Title 6 of the A.S.C.A, who are stranded off island because of the prohibitions declared by the American Samoa Government (ASG), can vote in our upcoming elections,” Lolo said in his letter.

He further stated that it appears that some have opposed extending the privilege to stranded residents claiming that extending this privilege is outside of the legal purview of Title 6 of the A.S.C.A.

The emergence of this election anomaly is being perpetrated by COVID-19 induced restrictions and it appears that the existing law does not provide a definitive pathway to ensure that our stranded residents’ voting rights are being preserved.

He goes on to note that the appropriate legislation has been prepared for submission to the Legislature for consideration requesting a “one time” authorization for eligible voters who are stranded off-island, to vote in the upcoming elections because it is not of their making that has prevented them from returning home in time to cast their votes in person.

Lolo said in his letter that he was informed that legislation has been introduced in the Senate by Hon. Faamausili to amend Title 6 to allow local residents stranded outside to cast their vote in absentia analogous to the other categories of residents permitted to cast absentee ballots.

“I commend Sen. Faamausili and the Senate for your sensitivity to the plight being faced by our stranded residents and ensuring that they have a say in the selection of our next set of leaders for our island,” said Lolo, adding that “It is my fervent hope that the House of Representative will take up consideration of this critical piece of legislation expeditiously to erase any doubt on the legality of the ballots being cast by stranded residents.”

In conclusion, Lolo urge the passage of this legislation given that the burden of responsibility mandated by Title 6, placed on each qualified voter to exercise his/ her right to vote such as actual their physical presence has been preempted by government declared restrictions including the inability to return home.

“They have become victims of the policies that we have put in place to protect their lives and those of us living here at home. Our forefathers and the lawmakers before us would not have anticipated this deadly pandemic,” said Lolo.

While the Election Office believes that it has the authority under existing law to amend the election rules to accommodate voters who are stranded off island due to the pandemic, the House Speaker told representatives last week that the only way to allow these votes is to amend the election law by passing legislation that is then approved by the Governor.

During a discussion in the House chamber last week, House Speaker Savali Talavou Ale also told representatives that there is absolutely no provision under the election law that allows local voters and candidates intending to run for public office, who are stranded off island due to the coronavirus pandemic, to vote absentee.