Fono updated on latest details of the upcoming repatriation flight 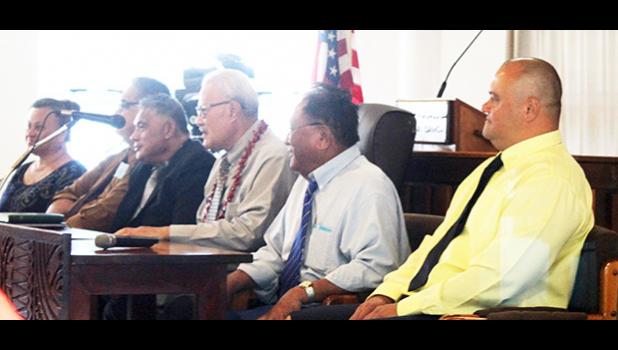 ASG is covering flight and quarantine costs — and asking for help from DOI
By
Fili Sagapolutele
fili@samoanews.com

Pago Pago, AMERICAN SAMOA — The 10-day quarantine in Hawaii is set to begin next week Monday, for the 160 American Samoa residents selected for the first repatriation flight from the U.S. set for Jan. 29th, and ASG is covering the costs of the operation, including the charter flight on Hawaiian Airlines as well as the quarantines in Honolulu and here.

This is according to acting Health director Motusa Tuileama Nua in testimony yesterday before the Senate Hospital/Public Health Committee in which senators were also informed that ASG is also seeking financial assistance for the repatriation operations from federal agencies, such as the US Interior Department.

The hearing was called following concerns voiced earlier this week by some senators over the start of the repatriation flights, while the COVID-19 pandemic remains a global threat and senators wanted more information from the ASG COVID-19 Task Force on their preparations.

Prior to yesterday’s hearing, Samoa News already received updated information that some of those who registered online for the American Samoa Repatriation Program portal were informed by DoH via email of being selected for the first flight. Registration online is Phase One.

Those selected were informed that Phase Two of the operation is the Pre-Boarding Quarantine at an address in Honolulu — which health officials as well as some of the travelers have confirmed — is the White Sands Hotel.

Travelers were given instructions of the protocol that needs to be followed, such as getting the required COVID-19 test prior to being quarantined. Travelers currently in Hawaii were told that they must have a COVID-19 negative test within 3-days of entering quarantine.

However, all travelers flying into Hawaii from other locations “must have a negative COVID-19 test within 3 days of departure for Hawaii”, according to a DoH email. The test results and other forms are presented to the American Samoa Repatriation Program staff at the Honolulu hotel.

All travelers currently in Hawaii are told to report to the quarantine facility no later than Jan. 18th and the DoH staff in Hawaii will contact these individuals.

For passengers flying into Hawaii from other locations, they “must arrive no later than Jan. 17, 2020. You will proceed directly to our quarantine facility where accommodations will be prepared for you and your family,” said DoH email, which also says that, “you will pay for your own meals until the start of quarantine.”

DoH also informed the selected travelers that, they “MUST” quarantine in Honolulu for “10-days prior to travel to American Samoa.”

Travelers were further instructed to bring with them enough clothes for hotel room quarantine for up to 24 days total in Hawaii and American Samoa as well as their medication, if needed.

“To keep you and your family safe during quarantine you will not be allowed to mingle with other traveling persons or family units,” DoH emphasized.

During yesterday’s Senate session, Motusa explained the work carried out by DoH since the suspension of air service closed in March as well as the coordination of preparations for repatriation flights, such as drills at the Pago Pago International Airport to test the readiness of local responders for the repatriation flights.

And all this was done during the previous administration, in which the current governor, Lemanu Peleti Palepoi Sialega Mauga, was also involved as the lieutenant governor at the time. And when Lemanu became governor, he looked at the preparations and the readiness of DoH for the start of these flights.

“And the answer is Department of Health is prepared for the first flight on Jan. 29th,” Motusa told senators, and further notes that DoH and LBJ already have a team in Honolulu working on the repatriation flight.

He said that 160 passengers for the first flight will start quarantine on Jan. 18th for the required 10-day period. Additionally, a team from the US Centers for Disease Control and Prevention and the Hawaii Health Department are assisting the DoH team in Honolulu.

Once the travelers enter quarantine, no one is allowed to leave the site and none of these travelers’ family members are allowed to visit, he said.

Following the 10-day quarantine, all travelers will be bused to the Honolulu airport, where the American Samoa team in Hawaii will assist with check-in and the passengers will then board the flight to Pago Pago.

He stressed the importance of the quarantine period in Honolulu and that all travelers on the repatriation flights are local residents — those who were stranded in the U.S. since borders were closed and local patients and escorts who were on Medicaid charters to the US and are now returning home.

Senators were also told that passengers, upon arrival in the territory, would go through Immigration and Customs at the airport and then be taken directly to the Tradewinds Hotel for the required 14-day quarantine period.

He said the government has taken over Tradewinds, which is also where the next COVID-19 test for the returning residents will be administered as well as the final test before their 14-day quarantine is finished.

Responding to questions from Sen. Magalei Logovi’i as to who is paying for the hotel quarantine in Honolulu, Motusa said ASG is planning on paying for the cost but at the same time DoH is requesting the U.S. Interior Department for assistance.

He said the proposed request to DOI will be for $5 million to cover the whole repatriation operation and the ASG COVID-19 Task Force will also be asking the U.S. Federal Emergency Management Agency for assistance.

Magalei voiced concern that the first flight is Jan. 29th and DoH is just now looking at DOI for funding. “What happens if the request is not approved? Are there any other funds now for payment?” he asked.

Motusa responded that the Honolulu hotel had requested three payments and the first payment of about $50,000 has already been made. And ASG is looking at its share of federal COVID-19 funds to assist in the future for these costs.

As to the cost of the chartered aircraft, Motusa said the local Hawaiian Airlines office had given the cost of $270,000 for the round-trip flight. With ASG forking over this cost, Motusa said none of the incoming passengers will have to pay for the airfare.

Magalei said he hopes that the next repatriation flight will also be the same — where ASG pays for the entire operation and not the travelers.

The cost-share for non-medical patients for the return flight was not available at press time. Samoa News was told that they (Medicaid Office) are currently in negotiation for a reduced cost-share for those traveling to Hawaii.

It should also be noted that Motusa is quoting a ‘cost of $270,000 for a round-trip flight’ — with no mention how much would be Medicaid referral share and other people flying out to Hawaii share?

Samoa News will report in future editions on the rest of the Senate hearing.