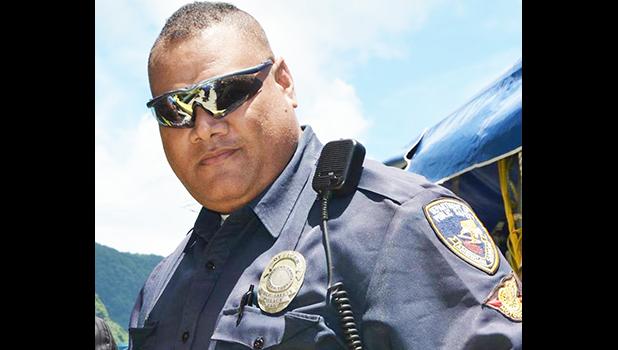 Lomu, who appeared before Chief Justice Michael Kruse yesterday morning for sentencing, was ordered to serve 28 months at the TCF, as a condition of his 7-year probation.

The jury found Lomu guilty of criminal fraud, a class C felony, punishable by imprisonment of up to 7 years, a fine of up to $5,000 or both; but ‘not guilty’ of tampering with a witness, a class D felony.

Lomu, who was released on a $10,000 surety bond, was represented by Assistant Public Defender, Ryan Anderson, while Assistant Attorney General Doug Lowe prosecuted.

Lomu broke down in tears when given the chance to speak. He apologized to the court, the community, and the American Samoa Government (ASG) for breaking the law.

He said he had been sworn-in to uphold the law and protect the safety of the community; but, unfortunately, he has failed to continue his service because he made a terrible mistake. “I was wrong and I did not fulfill my duty as a police officer to serve the people and government. I made a big mistake because of the wrong choice I made,” Lomu told the court.

“This will be my last time in court,” Lomu promised with tears in his eyes. “I’m truly remorseful for my actions and the bad choices I made not only because they affected my family, village, and church - but also my children.”

Anderson asked the court to sentence his client to probation. He said Lomu is a good man who made a big mistake; and this is his first criminal conviction. Despite the seriousness of the matter, Anderson said there was no violence involved in the crime committed.

The prosecutor echoed the defense argument for a probated sentence.

Chief Justice Michael Kruse recapped the facts of the case, saying the charges against Lomu arose when one of the dangerous inmates left the TCF at night without the TCF guards who were on shift that night knowing, and allegedly shot someone.

According to the court, Lomu was not involved in the inmate’s action when he allegedly escaped and committed another crime, but he was involved in ‘a cover-up’, as argued by the prosecution during Lomu’s trial.

Kruse said the court wonders what this cover-up was worth to the defendant.

The court noted that Lomu was a supervisor at the TCF, who didn’t take his leadership seriously, to lead other ‘young people’ (TCF guards), but instead, covered-up for something bad.

The court went on to state that it’s clear at this time what happened to the young people who were involved in Lomu’s case. The court understands that these young people worked together with the government in prosecuting the matter and some of them lost their jobs as a result.

“Cover-up”, according to the court, is one of the ongoing corrupt actions at the TCF. Kruse said there was a time during sentencing when a former TCF warden named Manase told the court that the “prison system is a joke” (o le mea ula).

So now, it’s 2020, and the court is still trying to sort out the many problems at the TCF. Speaking about the high walls currently surrounding the jail, Kruse said the court needs to know what’s the use of the facility.

Despite the defense’s recommendation for a probated sentence, Kruse said the judges decided to forego probation and go with a straight sentence. However, after reviewing other alternatives, such as the court having the opportunity to monitor Lomu’s behavior if he’s on probation, the court has decided to sentence him to a term of probation.

Lomu was sentenced to 7 years imprisonment and a fine of $5,000. Execution of sentence is suspended and he is placed on probation for 7 years, subject to several conditions.

He has to serve 28 months at the TCF without any release whatsoever; and he is to remain alcohol and drug free.
Associate Judges Faamausili Pomele and Muasau T. Tofili assisted Kruse on the bench.