In the future ASG will lease — not appropriate family lands 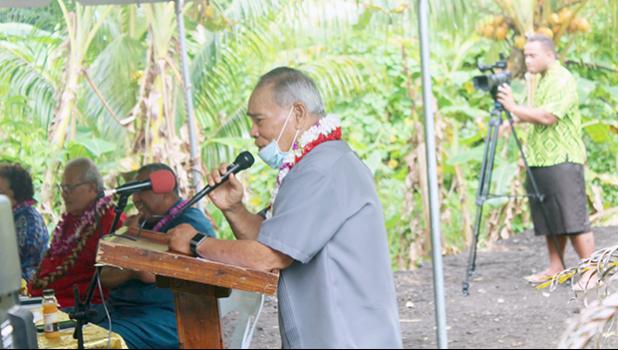 Pago Pago, AMERICAN SAMOA — Speaking at last Friday’s ground breaking ceremony for the road project that runs from the Fagaima/Ottoville road four-corners, through the Fonoti and Leapaga family lands up to the main highway in Malaeimi — Gov. Lolo Matalasi Moliga (as shown in this ASG photos) revealed that the government will no longer take by force family communal land for ASG projects, but it will lease the land, so that the future generations of these families will continue to receive benefits.

The governor thanked the Leapaga and Fonoti families for their cooperation and support for this very important road project that will benefit the traveling public. This road project is contracted to Happy Construction.

And starting with this road project, Lolo said the government would not take by force family communal land involved in ASG projects, but a lease will be thoroughly reviewed so that the land remains as an asset to the family and their future family members — not the government.

[It is presumed the governor is referring to ‘imminent domain’ referring to land that is bought by the government for the benefit of the public with fair compensation to the owner.]

While he publicly stated that a lease has already been drawn up with the Leapaga family, the governor didn’t elaborate on the terms of the lease, including the amount for the lease and for how many years.

(As previously reported by Samoa News the amount of $21,000 for the Leapaga Family lease is one of the projects under the FY 2021 budget for Special Programs, administered by the Governor’s Office. Lolo says in the document this amount is a lease payment for family land being offered to construct an access road in Fagaima and Malaeimi area connecting to the main road, close to Manumalo Academy.)

Lolo did say that payments for the Leapaga lease have been advanced up to the end of the term. The governor said that at the end of his term in December, Leapaga can request the new governor to advance future lease payments.

Lolo told the audience, which includes Nu’uuli traditional leader Soliai Tuipine Fuimaono, Sen. Fonoti Tafa’ifa Aufata, Congresswoman Aumua Amata and others that the role of government is to help improve lives of families now as well as future generations.

Speaking to Fonoti, the governor said he has instructed the Public Works director and the attorney general to work on finalizing leases that involve Fonoti family land on this project as well as other land use by the government.

Lolo said it was the wishes of Fonoti’s late father to donate family land for government use to benefit the territory’s future, but the governor points out that times have changed and as leaders they have to act in the interests of family members and future generations.

Lolo reiterated that all future government projects involving family land will not be taken by force by government, but would require thorough review and a lease.

He asked the Congresswoman to work with Paramount Chief Mauga T. Ausega and the new incoming administration to find a way to get federal compensation for family-owned land in Fagatogo, Utulei, Fagaalu, Pago Pago and other villages, that were taken for use by the federal and local governments years ago.

He said his dream is that one day these families will be compensated just like the land of Native American Indians, where the feds have compensated them for lands taken by force.

[Editor’s note:  There are still many native American land claims that are in dispute and not compensated for by the U.S. Government. For instance, the Black Hills land in South Dakota and Wyoming that was pledged to the Sioux Nation in 1868 was nullified without the Nation's consent in the Indian Appropriations Bill of 1876. Despite a Supreme Court case ruling in favor of the Sioux in 1980, the Sioux have outstanding issues with the ruling and have not collected the funds. As of 2011, the award was worth over $1 billion.]