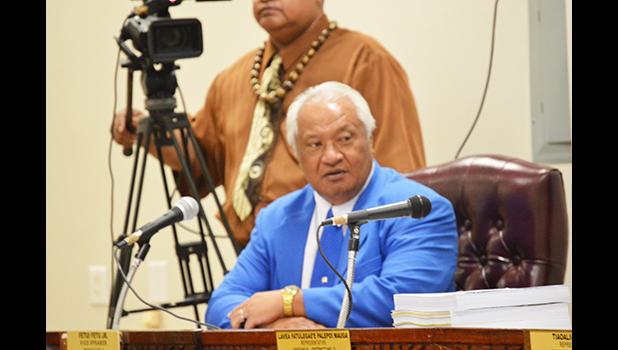 Pago Pago, AMERICAN SAMOA — The Fono Joint Budget Committee will convene in the near future, once a date is firmed up to debate the final fiscal year 2022 budget, and the Fono leaders will await the return to the territory of Gov. Lemanu Peleti Palepoi Sialega Mauga to meet with them on certain pertinent issues of concern raised by faipule.

This was the decision reached yesterday, by the joint committee following a nearly one-hour discussion of the budget for FY 2022, which is effective Oct. 1st this year. And the Fono leaders will meet soon and decide on whether to take a mid-session recess to wait for a final decision on the budget as well as the governor’s return to the territory, who currently is in Honolulu, Hawai’i.

As of yesterday, the current legislative session will officially end on Sept. 14th — completing the required by law 45-session days.

Prior to the joint budget meeting, senators met for discussions where Sen. Soliai Tuipine Fuimaono said he met earlier with Acting Gov. Talauega Eleasalo Ale, who informed him that the governor will be back in the territory on Sept. 13th.

Unresolved issues during the joint budget committee hearing, which ended last week, include concerns from the American Samoa Community College over lack of ASG revenues to fund the pay increases for its instructors — as some of them have left for higher pay at the local Education Department.

Also unresolved is the Fono action regarding budgets of offices and bureaus whose directors were never submitted to the Fono for confirmation.  And this remains unresolved during the Senate discussion and also during the Joint Budget Committee meeting.

Sen. Magalei Logovi’i told senators that he went to the ASG Budget Office about ASCC, and was informed of the governor’s directive to provide additional funds for the college. Magalei said the administration would address this through a supplemental budget that will be submitted later.

During the Joint Budget Committee discussion, several lawmakers spoke and some called for full passage of the FY 2022. But others argued that there are still a lot of unresolved issues regarding the budget that should be addressed first.

Senate President Tuaolo Manaia Fruean suggested not to fast-track passage of the budget as there is enough time for continued review, since the Fono has the last two weeks of this month and the entire month of September for a decision before the start of FY 2022 on Oct. 1st.

He said the governor is expected back on island on Sept. 13th and the Fono leaders can meet with Lemanu on issues raised by the committee during the budget review. Tuaolo also suggested a mid-session recess — maybe one or two weeks — to wait the return of the governor for discussions.

House Speaker Savali Talavou Ale, however, was adamant that there’s no reason to wait for the governor, because all other matters raised by the committee have nothing to do with the FY 2022 budget, on which the Fono should move forward.

In the end, the FY 2022 budget remains in the Joint Budget Committee for further review, with a new date to meet for final debate, to be announced. Savali then called the committee hearing as concluded.