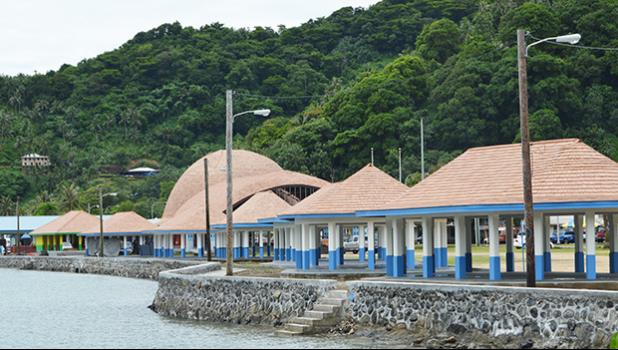 Pago Pago, AMERICAN SAMOA — In a public invitation released yesterday by the Governor’s Office, Gov. Lolo Matalasi Moliga and Lt. Gov. Lemanu Palepoi Sialega Mauga, and ASG invites the general public to the dedication of the Su’igaula o le Atuvasa Public Park facilities — as seen in this Samoa News photo taken yesterday from the ocean side of the park.

The ceremony is set to begin at 8a.m tomorrow, Dec. 5th and it’s not just the usual government dedication ceremony but a family event, where all ages are welcome to attend. Waterslides, entertainment and food will be provided.

American Samoa Visitors Bureau deputy director Vaitoa Hans Langkilde was on local radio stations yesterday promoting the event on behalf of the governor saying that the event is open to the public and the upgraded park will be the Su’igaula o le Atuvasa Cultural Center, with an official name to be announced tomorrow.