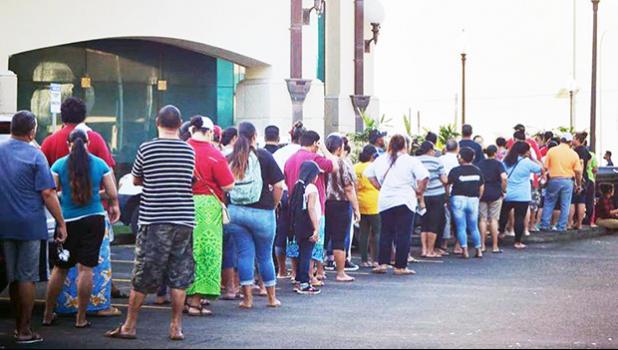 Pago Pago, AMERICAN SAMOA — It feels like we’ve been running a marathon and can’t find the finish line. Drug busts, domestic abuse and even campaign shenanigans paled in significance up side the all-consuming news story of 2020. In American Samoa and across the world — the pandemic — is the story and it’s still evolving.

Some of us have had our vaccinations while most wait ‘our turn’ to protect ourselves and our loved ones from COVID-19 and take up life in the ‘new normal’ going forward. But before we go, here is the year in headlines, a first draft of history for American Samoa.

Fono to convene next Monday; Gov Lolo to deliver State of Territory address

AG Ale stepping down to get into the political fray

Siaumau Jr. gets the maximum punishment: 15 years behind bars

MV Manu'atele badly damaged at dock in Ofu during storm

Quadruplets delivered at LBJ Hospital over the weekend

Fear of Coronavirus brings tighter restrictions for travel in 2Samoas

No confirmed case of coronavirus — but two local people in quarantine

No new confirmed cases for measles in American Samoa

American Samoa's fire dept down to one truck, one office location

Another domestic abuse case — and as usual — alcohol involved

Number of overstayers convicted of felonies continues to rise

Tropical Storm WASI remains on track south, away from territory

All public schools from ECE, K to high school will resume Monday

Sogelau Monument and Samoan Village Project going up by Museum

Catholic Church cancels all Sunday masses after this Sunday

ASG Treasury delays the due date for filing 2019 taxes

Local businesses anticipate economic hit and it will trickle down

American Samoa only US locale with no confirmed COVID-19 cases

In a test of faith, Christians mark Good Friday in isolation

Take a virtual scuba dive of the most beautiful marine sanctuaries

Care packages for our Samoan students stranded in Hawaii

DoH recommends standing pat with closed borders — until May 31

Task Force members get $2,000 checks as “token of appreciation”

One of two firefighters who survived deadly accident still hospitalized

Drug addiction in Am. Samoa — a personal story beginning in this issue

Public high school graduations for 2020 “will be virtual”

Probation officers said they “feared for their safety” at TCF

Largest ancient structure in all of Polynesia — up for sale

Another 30-day suspension of Hawaiian Airlines flights — the 3rd

Memorial Day to be celebrated this year in quiet remembrance

Governor gives the cabinet an ear-full over 2020 campaign violations

DPS cracks down on drug trafficking between Manu’a and Tutuila

Samoan Methodist Churches in Hawaii caring for our students

Get ready for long lines: New round of stimulus checks out Friday

Memo clarifies which workers are eligible for unemployment benefits

Intervenors: People of American Samoa do not want U.S. citizenship at this time

Congresswoman back in the territory — and glad to be home

Stranded Samoans from Alaska get to fly out on FEMA flight

Residents file lawsuits against Gov and ASG over emergency declarations

Flights for residents stranded in Samoa postponed to Wednesday

Iulogologo signals there may be a delay in resuming HAL flights

Gov: American Samoa will not reopen borders with Hawaii in July

Samoa's Pulemelei Mound to no longer be sold

Some COVID-19 restrictions ease today but not Hawaii-Pago travel

Of the 118 local residents repatriated so far, 87 are foreign nationals

DHSS announces delay in food stamps for this month

After 6 months on the run, alleged drug dealer arrested

JUST ASKING: What's the status of the lawsuit against ANZ?

Commercial flights between Manu’a and Tutuila resumed this week

DOE & Scholarship Board award 26 off island scholarships to local grads

More repatriation flights from Samoa to include specialized workers

Fono discusses issue of COVID-19 checks for their fono offices

Another faipule returns $10,000 check — before the Feds weighed in

Hawaiian Air agrees to suspend flights to Pago through August

Hawaii statute prohibiting US nationals from owning a firearm — struck down

FEMA confirms pull out of on-site personnel in American Samoa

Three daughters of American Samoa honored as “Women of the Century”

Traffic stop nets — not meth — but this time it is cocaine

Embarrassing moment for American Samoa during roll call at DNC

Students are ‘literally’ sitting on floor in Tafuna Elementary classroom

Fofo faipule calls for hearing on problems at Veterinary Clinic

DoH looking at options for repatriating local residents from U.S

Alleged threats to cut off a man’s head with a machete, leads to drug charge

4th round of stimulus checks for American Samoa distributed today

$1 million in “political appointee payments” will begin in new FY

Veterinary clinic is out of meds, out of vaccines, virtually out of business

In the future ASG will lease — not appropriate family lands, LOLO SAYS

Sabrina Suluai-Mahuka Teacher of the Year: An honor that runs in the family

Mauga challenges cabinet to step up to help stranded residents

Fono digs in, returns budget ‘as is’ to governor and adjourns — again

Families in the dark about police investigation into deaths in Amouli

Reservists who appeared at Dem convention won’t be disciplined

Over 400 overseas absentee voters have already cast their ballots

Still no progress on site of the new Fono Building

Local fireman transported to the US for further rehabilitation

Governor agrees to return THS’ lower campus to the school,

Six to eight cyclones probable for next few months

No repatriation flight for Nov, but breakthrough on horizon

December looked at as “possible month to begin” repatriation plan

TBAS extends benefits of a Debit Mastercard to businesses

Local veterans stranded in Hawaii remembered on their day

$2.3 M CARES Act money to be used for partial funding of new courthouse

Amata back in Washington as Congress goes into ‘lame duck’ session

Thanksgiving 2020: Prayers for our people around the world to “stay safe”

Ban on sea voyages and flights between 2Samoas remains in effect

Grandmother reveals “horrifying tale” of rape within her family

Amata points out an Air Force flight is a different circumstance

“Alia Tele” could become a reality after $4.4M USEDA grant

Teacher of Year to keynote ASCC 73rd Commencement on Friday

“Decorating our island” sends a message of peace and love

Repatriation of Samoa citizens from territory awaits word from PM

Barlow appeals to Gov Lolo to grant pardon and commutation

Repatriation flight pushed back to Feb 2021; vaccination may be key

Major flooding in parts of Samoa — many stranded in Apia

“Refusals” of COVID-19 vaccine is a right of an individual, DoH says

Pundits predict Rep. Savali will yet again be Speaker in 37th Legislature

Despite the holiday season, drug and assault cases crowd courts

Barlow’s case against Interior Secretary continued to next year

Stimulus bill signed — what’s in it for American Samoa?