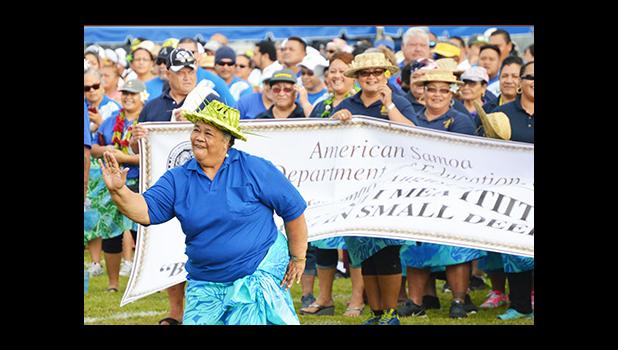 American Samoa’s workforce — both in public and private sector — were honored last Friday during the ASG 4th annual Workforce Day celebration at Veterans Memorial Stadium, where a moment of silence was observed for those workers who have passed away since the last celebration and also to honor government employees who have served 50 years or more in government service.

And it was a very happy day for ASG workforce — especially for those who receive ‘paper’ pay checks. Yesterday, Monday, was a local and federal holiday — Labor Day — and therefore, ASG got paid Friday, with paper pay checks distributed after the ceremony.

For ASG employees with direct deposit, they received theirs in their bank accounts early Saturday morning, crowding the ATMs machines island-wide.

In her speech, Gaisoa noted the importance of last Friday to honor the territory’s workforce, “because if workers are happy it will benefit the government, families and the entire territory.”

It’s not an easy task, she said, being head of the Chamber but she always shows respect (fa’aaloalo), which goes along with the theme of the celebration, “We Do Better Together”.

“So respect for God is first, respect for yourself, respect for each other, respect for everyone and everything — that’s the key to doing better together,” Gaisoa said and reminded the audience that the Chamber “is the voice of each private sector business” no matter if the business is a small one or big company, a taxi operator or a farmer.

“The mission of the Chamber [is] to encourage growth in business that will result in the growth of the territory’s economy. Because a strong private sector, means a strong government and the territory as a whole,” she said.

The Chamber president also noted that the government might lower the corporate tax rate.

Gaisoa thanked the government and the different agencies that have collaborated with the Chamber throughout this year. She acknowledged the collaborative effort and support of Commerce Director Keniseli Lafaele who “has been so helpful with the Chamber” providing files and statistics as well as meetings and discussions on a number of issues such as tourism and taxes.

“The fact still remains we’re just getting started. We still have lots of work to do together and I know we will,” she said and reiterated her thanks to the government for their support because the “ultimate goal is to build up our economy.”

“All we ask is to continue to open your doors to us, continuing to allow us to come to you to seek assistance, and continue working together with the Chamber because at the end of the day, we need you, but you also need us — because, we do better together,” Gaisoa said.

In his speech, the governor said Workforce Day is a “very important day to all of us, who are providing service to our people.” The governor cited this is one of the purposes for honoring the local workforce.

“Number one is to acknowledge every employee providing service to our people, whether you are a construction worker, a nurse, a school teacher, a Fono leader or even the lieutenant governor, we all exist to serve our people,” said Lolo.

The governor also thanked the private sector for their annual participation in the celebration “because it’s the workforce that helps the community.”

Lolo also acknowledged American Samoa’s sons and daughters serving in the US Armed Forces saying that, “you will never be forgotten for your service.”

As part of the annual ceremony, names of those who passed away since the last ASG Workforce Day were read followed by a moment of silence. This year, more than 30 from both public and private sector had their names read out by the Master of Ceremonies, Le’i Sonny Thompson.

Announcing the names of ASG’s workforce who have served in the government for 50 years or more followed. This year, seven names were read. Some of the recipients worked in the executive branch and now at the Fono, which includes Secretary of Senate Leo’o Va’a Ma’o and Sens. Galeai Tuufuli, Gaea Perefoti Failautusi  and Soliai Tuipine Fuimaono.