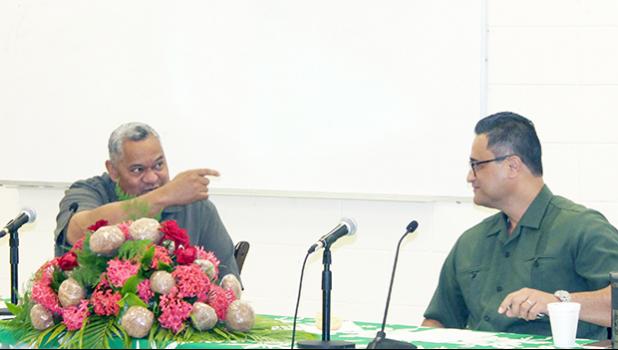 Pago Pago, AMERICAN SAMOA — During yesterday’s cabinet meeting, Gov. Lemanu Peleti Palepoi Sialega Mauga announced a planned new pay increase for the starting salary in government service and that such pay hikes can be absorbed by the government’s budget.

Lemanu spoke about the planned pay increase when he discussed the now lifted “rollback”  of the pay increases and conversion of contracts to career service since Jan. 1, 2019.

The governor acknowledged there was much criticism, when the rollback was first announcement, saying that perhaps it was not clearly explained at the start.

As previously reported by Samoa News, the governor in January this year, ordered a freeze in pay increases and conversions in “order to control spending”.

“In anticipation of reorganizing government functions,” the governor directed Human Resources to prepare a report of all pay increases and transfers of position from contract to career service from Jan. 2019 to the present.

“Accomplishing a rollback at this time helps us find a good starting point on staying on the path that Lt. Governor Talauega and I have committed to,” said the governor, in a statement last month, after lifting the freeze on the rollback.

He also said that he was to meet with the Compliance Review Committee (CRC), and “we will work on the next phase of this plan.”

At yesterday’s cabinet meeting, the governor said a report from DHR have been submitted and that followed with the lifting of the rollback. He then announced next phase, and that is pay increase, which was also included in the report from DHR and the CRC.

Lemanu notes that the “happy news” — based on a financial report submitted on Wednesday — is that the ASG budget can absorb the new proposed starting salary, which is $15.25 per hour — to be exact.

He did not say as to when the new pay hike will go into effect, or how many currently making $12,000 annually will get the new pay scale.

He said the CRC is now working on the adjustment of pay scale for those currently making $16,000 to $18,000. He said it’s fair and appropriate that when the lower salary level is raised, so must the next level go up.

Also addressed by the CRC are employees holding degrees for their pay adjustments, said Lemanu, who noted that the panel is preparing an update report and will then inform the cabinet as well.

Other good news shared by the governor is that paying increments has restarted and this was confirmed by the Human Resources director during the cabinet meeting, when the governor asked the director.

Lemanu said increments are set by law and its in the budget, therefore it must be paid, especially since the government’s budget can absorb the new pay hike for a starting salary.

He said the overall goal of the administration is to improve the pay scale for its workforce. He also said that additional information will be provided to directors in the coming days, on all these issues.