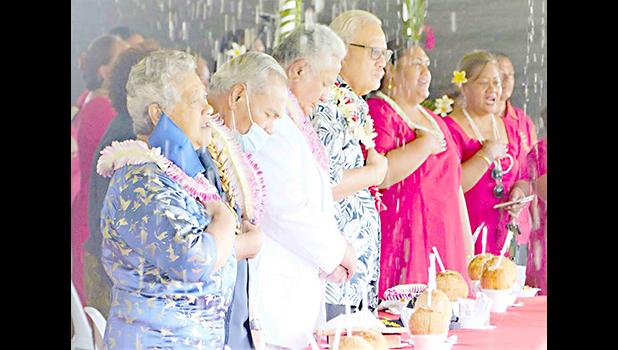 Pago Pago, AMERICAN SAMOA — Delivering his speech in Samoan during the ASG-sponsored Veterans Day program at the Veterans Memorial Center, Gov. Lolo Matalasi Moliga expressed gratitude and appreciation to American Samoa’s veterans as well as those still servimg in all branches of the US Armed Force.

It was a rainy Veterans Day on Wednesday morning during the ceremony and the governor described the rain — heavy at times — as a blessing for American Samoa. He noted that in the coming weeks, he will leave public office and return to village life where he will maintain his role as a protector of Samoan culture, through his role as a traditional chief.

To the people of American Samoa, he said that one priority that leaders of the government need “is your prayers and support”.

The governor congratulated Congresswoman Aumua Amata who will be returning to Washington D.C. saying that the federal government and the nation is facing some challenges and he asked everyone to pray for the US President, the President-elect and the nation.

During the final days of his administration, the governor told his cabinet members to continue to work diligently until the last minute and also support the new incoming governor.

In his annual message released earlier this week, the governor said that on this year’s Veterans Day “we will continue our vigil of expressing our gratitude and our sense of gratefulness to all the Veterans for their services which foster our protection and sustain our core values inherent in our democracy.”

“We wish to pay special tribute and lavish praise on all our Veterans, along with sustaining our continual prayers for their welfare and that they have been freed from any post adverse effects on their lives,” he said.