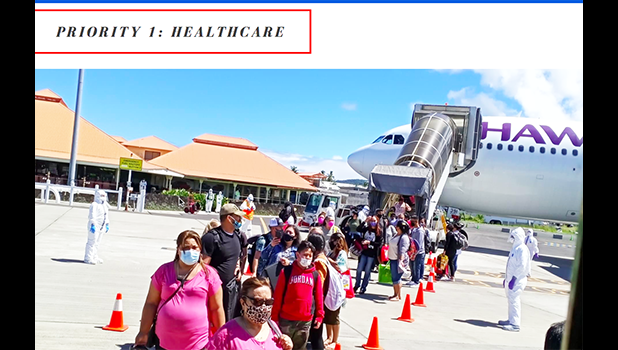 Gov. Lemanu Peleti Palepoi Sialega Mauga also delivered an address on the 100-day report aired around 5:30p.m Wednesday on KVZK-TV, with the video of the address made available for public viewing on ASG’s other social media platforms.

“We must steady the course — let our faith in God be a beacon of hope and promise. Only TOGETHER as a collective community can we truly leave things better than we found them,” Lemanu said in his written opening remarks of the first-page of 34-page report of the first 100-days.

“Our challenge is to keep ‘Leading the Charge’ within our respective communities — our churches, our schools, and our families,” he said.

In his televised address, the governor pointed out that April marks the new Administration’s first 100-days in office. “Upon assuming office, we made a commitment to serve with integrity and ensure that our governance will improve the lives of the entire community,” he said noting that the first 100-days in office were met with promise and challenges.

“We entered office in the face of unprecedented local and global challenges,” he said.  “A deadly pandemic, a drug and suicide epidemic, the ever growing threat of climate change, and an unapproved budget [for FY 2021].”

“If the first 100-days has taught us anything, it is that adversity has not deterred us from reaching our shared vision and goals. And while the work is far from over, our resilience and faith as a Pacific people, amid much uncertainty, has been a beacon of hope,” he said.

According to the governor, effective leadership relies on the ability to translate a shared vision into actions. Accordingly, the administration has rolled out its 100-days report, with a focus on “key priorities”- Healthcare, Economy, Education, and Infrastructure.

“We have a lot to be proud of regarding the response to the pandemic that has claimed the lives of millions worldwide and continues to wreak havoc on the healthcare systems and economies globally,” Lemanu noted. “In spite of our limitations, American Samoa continues to lead the charge in its handling of the pandemic.”

The governor spoke about the high COVID-19 vaccination rate for American Samoa — close to 50% fully vaccinated and over 50% with at least one-dose, administering over 35,000 doses to the eligible local population of American Samoa, which is one of the 14-countries in the world with no local virus transmission.

Furthermore, American Samoa has implemented “stringent COVID-19 testing requirements at both the airport and seaport to prevent the virus from entering our borders.”

Lemanu recalled that the new administration announced on day-one after taking office of its planned repatriation flights brining home local residents stranded across the U.S. and this “would be among the administration’s foremost priorities.”

And this effort was carried out by the COVID-19 Task Force, chaired by Lt. Gov. Talauega Eleasalo V. Ale, with the goal of reuniting families and maintaining COVID-19 free status.

The task force through collaborative support of Hawaii’s governor and lieutenant governor, Hawaii Health Department and the CDC Foundation created a travel bubble, with enforced pre-travel, post travel quarantine requirements for the purpose of frequent COVID-19 testing, the governor explained.

“In the first 100-days, the American Samoa Government has successfully completed three repatriation charters, brining home close to 600 U.S nationals, US citizens, permanent residents and essential employees” from the US, he said.

ASG also repatriated nearly 78 residents from and to Samoa and has begun planning for repatriation charters for Tonga and Fiji.

While “several sectors — tourism, travel, shipping, transportation — of the economy have taken a hit as a result of the pandemic,” the governor said,  “the local economy is projected to expand as a result of the increased federal COVID-19 assistance.”

For example, he said that “multiple COVID-19 relief packages” have been mobilized to provide — among other things — direct economic stimulus payments to residents, mass vaccination campaign across Tutuila and Manu’a, extension of unemployment assistance and loans to small businesses.

Also, in the first 100-days, “our administration has ‘led the charge’ by keeping money in residents’ pockets” by planning and starting a pay raise for ASG employees to meet the current federal minimum wage rate of $7.25 per hour and adjustments to degree holders salary threshold; repeal ofthe 2% wage tax after 13-years; increased lending and capital programs; and approval of businesses licensing process supporting a 20% increase — 700 business license applications.

On ASG fiscal reform and accountability, the governor points to making outstanding payments to local vendors; distributing weekly timely tax return payments worth over $4.2 million for 20,397 tax filers, planning for the first ever direct deposit of Economic Impact Payments (EIP) — or stimulus checks — from the federal American Rescue Plan. (See separate story in today’s edition on the third EIP distribution.)

“The upkeep and improvements to our airports, healthcare, harbor, roads and education facilities is paramount to our commitment to bettering the lives of our community,” the governor declared.

He cited new and ongoing infrastructure projects, such as Ofu Airport runway construction project, and Pago Pago International Airport project — which “are in progress to ensure that our airport and port facilities are able to respond to the ever growing demands of the shipping industry and maritime commerce.”

For healthcare, he said improvements are currently being made to the clinics in Manu’a, Aunu’u and Amouli as well as LBJ Medical Center “to cater to the community.”

The governor also said that school improvements “are essential during this pandemic,” pointing out that improvements and upgrades are in the works for several primary and secondary schools.

And these improvements and upgrades to local education facilities will support student learning and achievement, and help sustain safe operations and build upon the educational system.

“A great deal has been accomplish in laying the foundation for the work we must continue to do over the next four years,” he said. “We are confident that the structural and fiscal reforms that we have put into place will pave the way for a government that is more responsive, equitable and transparent.”

“And now, as we pass the 100-days mark, we turn our attention to the territorial [government] budget of fiscal year 2022. The task before us is to build upon the momentum of the first 100-days and continue the important work ahead in delivering a budget that will serve and develop our great land and people,” he concluded.

Samoa News understands that the governor had been meeting with cabinet members on their departments’ and agencies’ proposed FY 2022 budget, which the administration wants ready for submission to the Fono when lawmakers convene in July for the Second Regular Session of the 37th Legislature.

The Governor’s Office had called a news conference for 10a.m. Wednesday where the governor had planned to officially release the 100-day report. However, after a little over an hour of waiting at the Governor’s Office, reporters from Samoa News and KHJ News opted to leave as there were other news matters to attend to.

Yesterday morning, the Governor’s Office extended gratitude for the patience of the news outlets on Wednesday and apologized for the last-minute delay in the Governor's schedule, that caused the news conference to be pushed to a later date.

The Governor’s Office, did release to the local news outlets on late Wednesday afternoon the video of the governor’s televised address and a copy of the 100-days report — which is posted with the online version of this story to [www.samoanews.com].