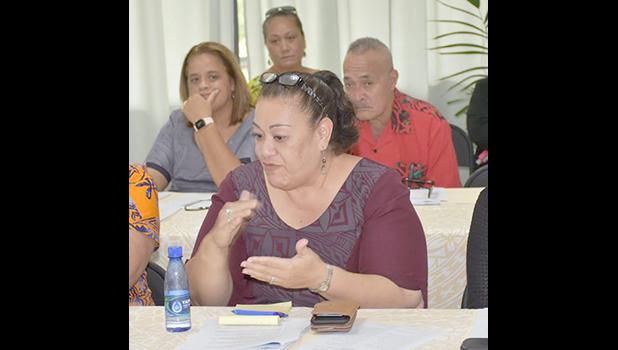 Pago Pago, AMERICAN SAMOA — In a Mar. 25th memo to cabinet members, Gov. Lolo Matalasi Moliga reappointed attorney, Mitzie Jessop-Ta’ase as acting Attorney General, saying that a “change of leadership during the current State of Emergency would be devastating to our efforts to protect our people and the territory of American Samoa” from the coronavirus.

Although the Senate gave its unanimous approval earlier this month, the House rejected Jessop-Ta’ase’s nomination. The latest House action was made last week during a vote on the motion for reconsideration.

Since the House vote, which now officially rejects the AG nominee, there have been public questions as to the governor’s next move, because the Attorney General plays a vital role during the coronavirus State of Emergency in advising the governor and ASG entities on legal matters.

“This is a pivotal moment for our people as we come together to face the challenge of the COVID-19 pandemic,” Lolo wrote in the memo released last Thursday afternoon to cabinet members. “Now more than ever, we need leadership stability in the Office of the Attorney General.”

“Similarly, as we mourn the tragic murder of a young mother by her husband, we must ensure the Attorney General is prepared to prosecute those in our community who pose a risk to our safety,” he said — Lolo didn’t identify the “tragic murder” incident.

“We must have an Attorney General with the experience and foresight to do what is necessary to protect our citizens,” he said.

And this is the reason, said the governor, that he is reappointing Jessop-Ta’ase — who has 23 years of experience practicing law locally and in the U.S — to continue as the Attorney General.

Of those 23 years, Jessop-Ta’ase served 7 of them as the territory’s deputy attorney general, three-years as the Senate counsel and two years were as an Assistant Public Defender, the governor explained.

“In the short period she has assumed the leadership reigns of the Office of Attorney General, the responses and decisions emanating from the Attorney General’s Office have been quick and robust,” Lolo points out.

The governor claims that American Samoa has fewer than 30 attorneys actively practicing on-island and most of these attorneys have left public service for the private sector.

“In spite of the appeal of monetary rewards sought by our local attorneys, Ms. Jessop-Ta’ase has continued to serve our people as a dedicated public servant,” he points out.

Despite her appointment being rejected by the Fono — and pursuant to provisions of local constitution and law — the governor says that it’s his “intention” that Jessop-Ta’ase shall continue to serve as Attorney General of American Samoa “as manifested by this reappointment.”

Some local and off island readers have taken to social media and emails to question why the House vote for Jessop-Ta’ase was carried out in secret ballot.

Samoa News has reported many times in the past years, rules for both the Senate and House dictate that all votes on confirmation for executive branch directors and ASG board members are by secret ballot.