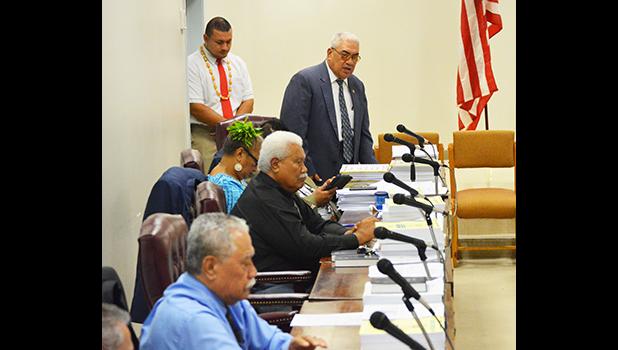 Pago Pago, AMERICAN SAMOA — Upon receiving the Fono’s approved version of the American Samoa Government’ fiscal year 2021 budget — in which lawmakers reduced the executive branch funding by more than $6 million, while giving the Legislature an additional half-a-million — Gov. Lolo Matalasi Moliga voiced his “disappointment” with the Senate President and House Speaker.

And the governor, in a Sept. 29th letter to Fono leaders sought a “possible consideration of a continuing resolution to allow the government to operate for the next 30 days at FY 2020 budget levels while the FY 2021 is revised.”

However, it was Tuesday this week when the 4th and final session of the 36th Legislature officially closed and the Fono does not return until next January for a new legislative session.

At press time yesterday, Samoa News learned that the governor and Fono leaders were discussing the best way to move forward so that the government continues to operate at the start of FY 2021, while other issues are resolved later.

Lolo had proposed a final FY 2021 of $459.45 million and funding sources included $71 million in taxes. However, the Fono’s final approved budget version reduced the budget by $6.50 million — which was cut from taxes — down to the final budget total of $459.45 million.

The final budget includes $500,000 that the Fono allocated for itself from under the Governor’s Special Program for “FONO OFFICES”.

The Fono made drastic budget cuts for the majority of executive branch departments and offices including Public Safety, Education Department, Treasury, Office of the Governor, Public Works and Legal Affairs Department.

The governor received the Fono’s approved budget the later part of Sept. 28th and the following day, Lolo wrote to Fono leaders.

“It is with great disappointment that courtesy was not extended to the Executive Branch manifested in the furnishing of the fundamental rationales prompting the across the board rescission of agency budgets while adding $500,000 or 7% increase to the Legislature’s budget which obviously contradicts whatever criteria it utilized to justify its executed actions,” Lolo wrote to Fono leaders.

Given the budget cuts made by the Fono “will extremely undermine the vision inherent in the preparation of the fiscal year 2021 [budget]”, the Legislature “is obligated to provide details and factors which it used to base its budget decision,” the governor pointed out.

Lolo explained that the end of August financials indicate that “a huge surplus will be realized and revenue collection will meet the FY 2020 revenue projections.”

“These positive financial experiences have provided confidence in the revenue projections for fiscal year 2021,” Lolo said. “Instead, the Legislature reduced projections by $6.5 million or 40.6%.”

He said it’s important for the Fono to explain and provide data to “substitute this drastic reduction” in revenues.

“This decision along with the arbitrary slashing of agency budgets appears to be a mathematical exercise instead of a thoughtful plan to sustain social and economic progress achieved since 2013,” he said.

The governor also said that the documented increases in agency budgets, proposed for FY 2021, “accommodates our efforts to encourage our workers to seek further education, which will translate not only to improvement in the quality of services rendered to our people, motivate productivity, establish a sufficient living wage, but more importantly to incentivize our young people to compete and to seek post graduate education.”

In setting the salary threshold at $12,000 for high school graduates and $16,000 for Associate degree holders, Lolo said, “we send a clear message highlighting the importance of education.”

“We also have raised salaries to the $12,000 minimum salary threshold,” he further explained, noting that the Education Department underwent a thorough salary transformation to “bring attention to our commitment to the educational development of our children reflecting our investment in the future of American Samoa.”

(Samoa News points out that the governor had explained these similar points in his cover letter to Fono leaders, when he submitted in late July the FY 2021 budget, justifying the increase in FY 2021 compared to FY 2020.)

According to the governor, the proposed change by the Fono will “create havoc” with the implemented actions aimed to improve the quality of life of our people.

“We have invested in moving our government forward and not retroversion and this decision by the Legislature will regrettably push us backward,” he said, adding that the FY 2021 budget was prepared to provide the next leaders sufficient financial room to modify the financial plan to reflect the new administration’s priorities.

Lolo hoped the Fono leaders would provide the basis upon which the decision on FY 2021 was based.