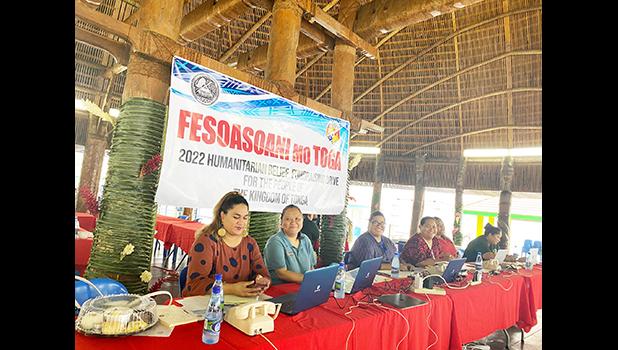 Pago Pago, AMERICAN SAMOA — Gov. Lemanu Peleti Mauga in a Jan. 25 memorandum to cabinet members has asked that all employees of the American Samoa Government contribute to the ASG’s humanitarian relief fundraising drive for Tonga, devastated following a tsunami more than a week as a result of a volcanic eruption that covered the island nation with ash.

Contributions according to the memo are expected from cabinet members to the tune of $200; deputy directors $100, assistant directors $50, division heads and managers $20, and all remaining employees at $10 per person.

The governor said the Kingdom of Tonga continues to suffer from the devastation of the recent volcanic eruption that sent a ripple effect across the Pacific and around the world.

“We cannot sit idly while our sister island nation struggles to recover from this disaster,” the governor said. “We must join them in the recovery efforts by providing aid in the form of financial assistance.”

Lemanu then asked all ASG employees “to heed this call to come together and contribute to this noble cause.” He said that cabinet members must lead the collection efforts of their respective departments.

“Our resilience as a Polynesian people is strengthened through our mutual support for each other,” the governor pointed out. “Your generous donation will go a long way in helping to restore normalcy to the lives of our Tonga brothers and sisters.”

He concluded, “Let us continue to keep the Kingdom of Tonga in our thoughts and prayers.

Meanwhile, members of the local Tonga community through the Tongan Church Community of American Samoa is continuing its fund raising relief efforts throughout this week, with their tent and supports next to the movie theater in Nu’uuli.

Tonga is already rebuilding amid the devastation of a double whammy of natural disasters, according to the Red Cross.

Tonga Red Cross staff and volunteers have been assisting people from the moment the tsunami alert was triggered, and are ramping up the delivery of drinking water, temporary shelters and other critical relief supplies across the country.

Shelter was a top priority for families whose homes had been wiped out, he said.

Meanwhile, the humanitarian response into Tonga has been described as well a handled process, almost two weeks on from the eruption and tsunami.

The World Health Organisation (WHO) has been helping to meet immediate needs, with a response coordinaton based in Fiji.

WHO representative to the South Pacific Mark Jacobs said all of the supplies were being sent in contactless fashion.

"The response seems to be going well and it seems to be Tongan government lead. It's been very active and well co-ordinated. Things like water supplies, food and communication supplies all sorts of things like that.. the supplies to be handed over in a way that doesn't expose people to Covid," he said.

Jacobs said there was not currently a need to send additional people to Tonga.

UK, CHINA AND JAPAN ALL HELPING OUT

A British naval ship, the HMS Spey, has arrived in Tonga where her crew have unloaded disaster relief.

The aid is being collected at a logistics hub as part of international aid efforts.

The supplies are then coordinated and will be moved to the most affected islands.

The UK government said HMS Spey would continue to work closely with the New Zealand and Australian navies to coordinate relief efforts with the Tongan authorities and the British High Commission.

HMS Spey has returned to sea but remains in the waters of Tonga, ready to help where needed.

The Chinese Embassy in New Zealand said the assistance included relief supplies of drinking water, food, generators, water pumps and chainsaws, which were being shipped to Tonga today.

A spokesperson also said it would provide money for Tonga.

Pacific Islands Forum secretary general Henry Puna said member nations were standing by to support Tonga in whatever way they can.

Japan's first batch of emergency relief assistance has been received by the Kingdom.

Japan has provided $US1 million to Tonga through international agencies for the recent disaster of the volcano eruption.

Embassy of Japan ambassador in New Zealand Ito Koichi said it was important Tonga was supported, and Japan was ready to provide further help.

"When the Japanese aeroplane arrived at the airport (the) Tongan Prime Minister was so glad. He sent a message to the Japanese people - a friend in need is a friend indeed."

Puna announced a Blue Pacific fundraising Campaign for Tonga which was open to all forum member countries, various agencies and development partners and will run until 25 February.

Puna said he understood Prime Minister Siaosi Sovaleni, his government and the people of Tonga were still coming to grips with the extent of the disaster, but he wanted to reassure them the forum was ready to help.

"We are family, we're here ready and eager to help and please anything we can do let us know we are more than prepared to step in and help."

RNZ Pacific contributed to this report.