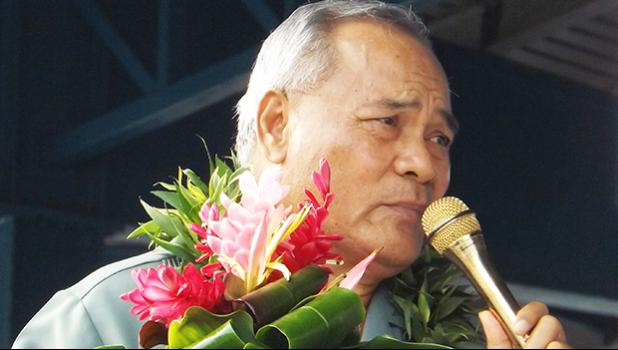 Pago Pago, AMERICAN SAMOA — Gov. Lolo Matalasi Moliga delivered special remarks yesterday during the final day of the 40th Meeting of the US Coral Reef Task Force at the Fale Laumei where he commended the group's work and acknowledged with appreciation the commitment by the US to “safeguard and protect our nation’s coral reefs against the damaging effects of global warming and widespread pollution.”

In his written remarks, Lolo said the coral reef for American Samoa is one of our basic life sustaining assets for food security and protection of land based resources. This fact is memorialized in our oratorical language, our culture, and our way of life.

In essence our coral reef is our life, he said.

"Our isolation from the economic mainstream creates significant vulnerability, which necessitates and compels our commitment to protecting and sustaining the integrity of our reef system," he continued. He noted the many dangers that have caused  “our share of reef degradation and deterioration” — both biological and man-made.

He pointed to the importance of our coral reefs in terms of economic development opportunities, as well as the need to protect it due to the majority of American Samoa’s economic assets being vulnerable to flooding, strong wave surge, and erosion.

"This year’s theme of “Natural Infrastructure; Building Capacity and Disaster Preparedness” is most appropriate particularly for American Samoa," he said.

"Our reef system, which is our natural infrastructure, safeguards the destruction of our physical infrastructure given the susceptibility of our only highway, which provides land transportation connectivity for the entire island.”

He also noted that our airport runway which “runs parallel to the ocean, exposing it to strong wave surges, high winds, constant erosion” could cause damages to it and “isolate American Samoa from the world”.

According to Lolo, "studies conducted recently seem to provide some good news on the resiliency of our coral reef system relative to its ability to recover from damages inflicted by destructive agents, which are manmade or biological.

"What we need to do is obvious… Keep our Reef System healthy and build its resiliency capacity.

However, the governor said, "We are also extremely mindful that economic considerations of laws prohibiting the importation and use of plastics, foam containers, chemicals, and other coral reef destructive agents must be carefully weighed to ensure that a balance is struck between environmental considerations and economic demands."

Lolo continued that this balance must also be sought in the “aggressive enforcement by the US Coast Guard of environmental laws” versus “the loss of economic activity because fishing vessels would no longer home port here but move to our closest neighbor.”

And then there is our remaining cannery’s livelihood, which is being threatened because of excessive environmental laws requiring compliance. He pointed to its competitors not being subjected to huge investments demanded to avoid huge fines and penalties.

Lolo said, “We stand to lose 5,000 direct and indirect jobs if our remaining cannery is to shutdown because insensitive enforcement of federal laws."

The governor concluded, "I challenge all of you who are here today to fashion solutions so we can attain an acceptable balance between enforcement, preservation and conservation with the economic survival of island countries like American Samoa.

"I want to thank you for your work and your commitment to the preservation of our natural infrastructure, investment in building resiliency, and continuing the research to find better ways to protect and preserve our ecosystems while allowing enjoyment of inherent economic benefits

"I wish all of you from off-island a safe trip back and I hope you enjoyed your short stay here in our home."